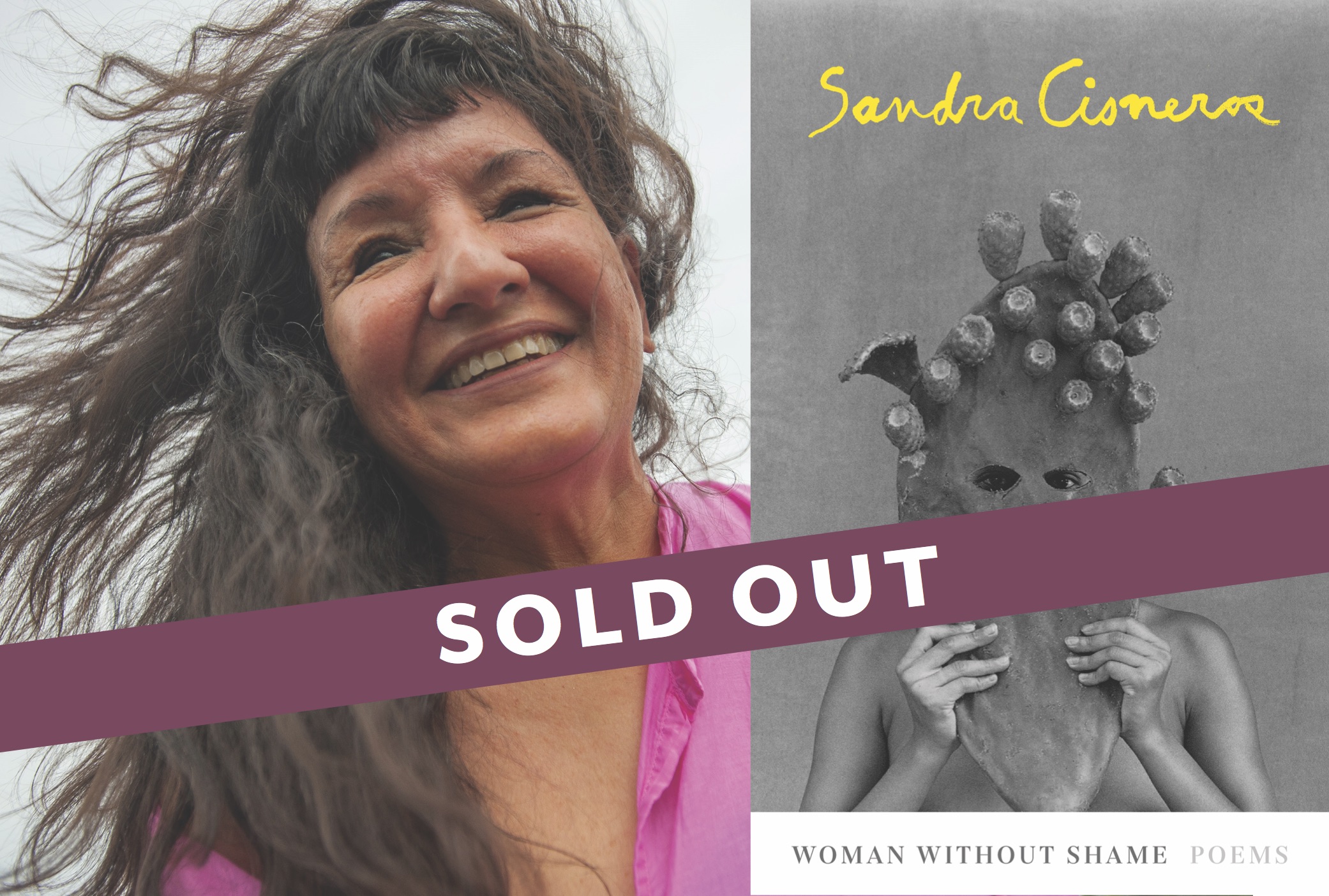 This event is now SOLD OUT. Thank you for your interest! You may still order a signed copy of Woman Without Shame at the bottom of this page.

This ticketed event, which will take place at the Cowell Ranch Hay Barn, is cosponsored by The Humanities Institute at UC Santa Cruz the Research Center for the Americas at UC Santa Cruz, and KAZU 90.3. Tickets include entry to the event and a copy of Woman Without Shame.

“Nearly three decades have passed since the award-winning Cisneros’s previous collection (Loose Woman), and what a joy to immerse oneself in the richness of those years! . . . These poems sparkle with levity, empathy, sensuality, and sight. An appreciation for the aging self, its evolving body and understanding, threads the work, as do wit and humor. . . . Rather than avoid pain or suffering, the poems explore their coexistence with wonder and beauty. . . . Woven with perspective, melded by dual languages and countries, attuned to sense and place, this generously alive collection–sin censura ni vergüenza–will delight both devoted fans and those who may not often read poetry.” —Amy Dickinson, Library Journal (starred review)

It has been twenty-eight years since Sandra Cisneros published a book of poetry. With dozens of never-before-seen poems, Woman Without Shame is a moving collection of songs, elegies, and declarations that chronicle her pilgrimage toward rebirth and the recognition of her prerogative as a woman artist. These bluntly honest and often humorous meditations on memory, desire, and the essential nature of love blaze a path toward self-awareness. For Cisneros, Woman Without Shame is the culmination of her search for home—in the Mexico of her ancestors and in her own heart.

"These new poems by Sandra Cisneros prove that a mystic poet can be an aging brown-skinned woman shameless in her being. On this road where the sacred and profane hold hands, fight, and even dance a little beneath millions and billions of stars, even being a woman is called a sin. These poems are prayers for understanding this earthy journey of mystery and beauty. These poems cross the road with impunity. Impunity is wearing a fedora and smoking a cigar. These poems send us light. Strangers become relatives. We sit down and have a bite to eat together, a little something to drink, and listen to poetry. I want to live in this book, keep the doors and windows open, even if stray dogs and beggars wander through." —Joy Harjo, 23rd U.S. Poet Laureate

SANDRA CISNEROS is a poet, short story writer, novelist, essayist, performer, and artist. Her numerous awards include NEA fellowships in both poetry and fiction, a MacArthur Fellowship, national and international book awards, including the PEN America Literary Award, and the National Medal of Arts. More recently, she received the Ford Foundation's Art of Change Fellowship, was recognized with the Fuller Award for Lifetime Achievement in Literature, and won the PEN/Nabokov Award for Achievement in International Literature. In addition to her writing, Cisneros has fostered the careers of many aspiring and emerging writers through two nonprofits she founded: Macondo Writers and the Alfredo Cisneros del Moral Foundation. As a single woman she made the choice to have books instead of children. A citizen of both the United States and Mexico, Cisneros currently lives in San Miguel de Allende and makes her living by her pen.

CAN'T MAKE IT TO THE EVENT? Order your signed copy of Woman Without Shame below: