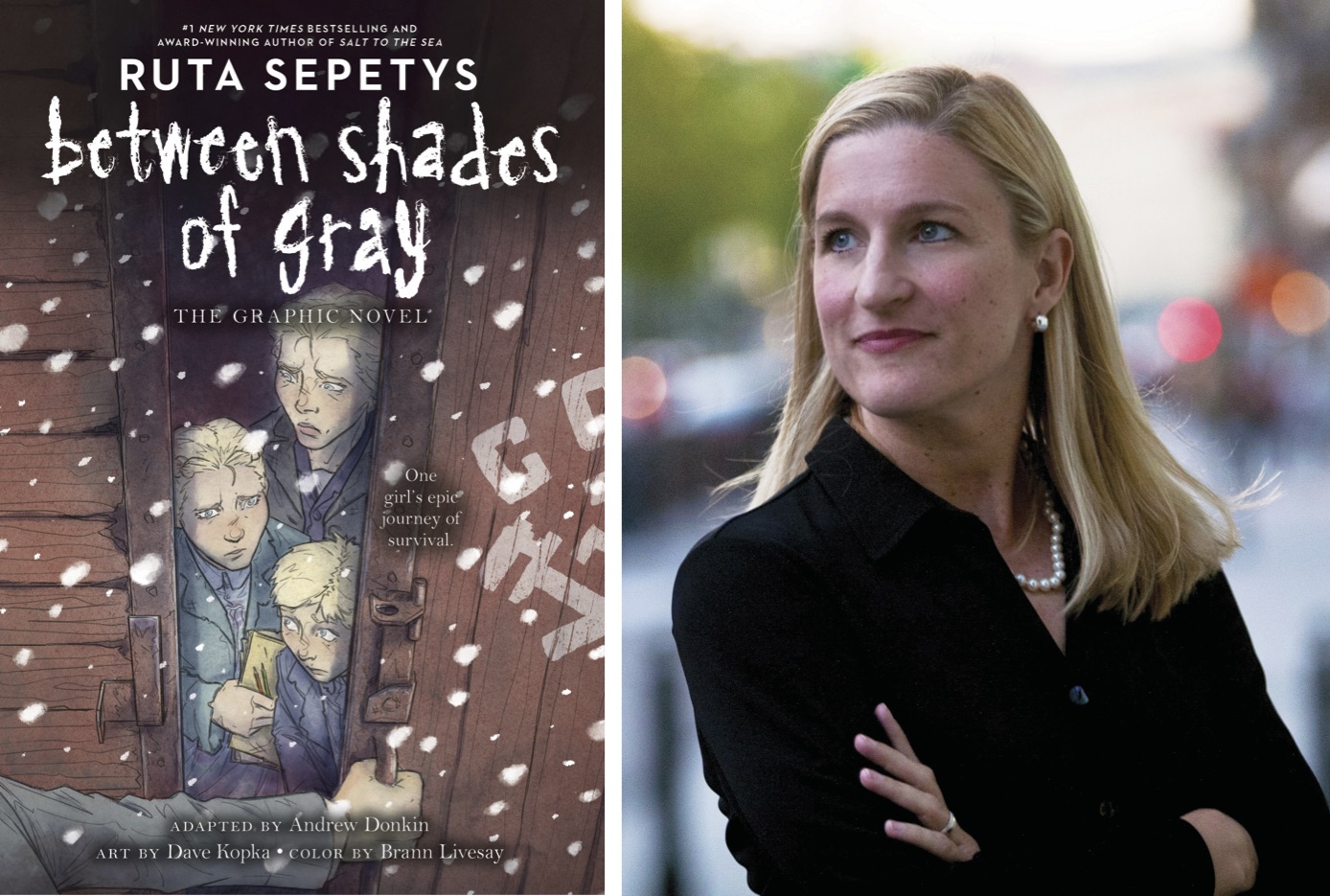 "Few books are beautifully written, fewer still are important; this novel is both." —The Washington Post

Click here for tickets to this special online event! Many ticket options, including a limited number of exclusive virtual meet-and-greet ticket bundles with Ruta herself!

From #1 New York Times and international bestselling author and Carnegie Medal winner of Salt to the Sea comes a story of loss and of fear—and ultimately of survival—in a brand-new four-color format.

June, 1941. A knock comes at the door and the life of fifteen-year-old Lina Vilkas changes forever. She's arrested by the Soviet secret police and deported from Lithuania to Siberia with her mother and younger brother. The conditions are horrific and Lina must fight for her life and for the lives of those around her, including the boy that she loves. Risking everything, she secretly passes along clues in the form of drawings, hoping they will reach her father's prison camp. But will her messages, and her courage, be enough to reunite her family? Will they be enough to keep her alive?

A moving and haunting novel perfect for readers of The Book Thief, now available as a stunning graphic novel.

Ruta Sepetys (rutasepetys.com) is an internationally acclaimed, #1 New York Times bestselling author of historical fiction published in over sixty countries and forty languages. Sepetys is considered a "crossover" novelist, as her books are read by both teens and adults worldwide. Her novels Between Shades of Gray, Out of the Easy, Salt to the Sea, and The Fountains of Silence have won or been shortlisted for more than forty book prizes, and are included on more than sixty state award lists. Between Shades of Gray was adapted into the film Ashes in the Snow, and her other novels are currently in development for TV and film. Winner of the Carnegie Medal, Ruta is passionate about the power of history and literature to foster global awareness and connectivity. She has presented to NATO, to the European Parliament, in the United States Capitol, and at embassies worldwide. Ruta was born and raised in Michigan and now lives with her family in Nashville, Tennessee. Follow her on Instagram @RutaSepetysAuthor and on Facebook at facebook.com/rutasepetys.

Andrew Donkin (andrewdonkin.com) has sold over ten million graphic novels, children’s books, and adult books worldwide. His graphic novel Illegal (co-written with Eoin Colfer) was a bestseller in the USA and UK and has won or been nominated for over forty book awards. He has long been interested in the issue of refugees and displaced people. He has written for many global franchises, including Batman, Superman, Doctor Who, and Artemis Fowl. Andrew lives near the river Thames in London with his family. You can follow Andrew on Twitter and Instagram @andrewdonkin.

Dave Kopka (davekopka.com) is an illustrator whose work engages in print media in the form of book art, comics, and portraiture. He is fascinated with exploring the vast spectrums of art and illustration, employing an intricate attention to detail, and aspires to be a creative force in visual narrative through profound storytelling--usually involving the struggle to overcome, and the humor and misfortune behind internal conflict. He currently haunts Oakland, California. You can follow Dave on Twitter @DaveKopka and Instagram @drawkop.

Marius Markevicius directed and produced "ASHES IN THE SNOW”, the film adaptation of the New York Times best-selling novel Between Shades of Gray. Marius directed and produced the documentary feature film “THE OTHER DREAM TEAM,” which premiered in competition at the Sundance Film Festival and also screened at IDFA and Sheffield Docfest. “THE OTHER DREAM TEAM” was distributed by Lionsgate & Disney and was nominated for the 2012 Best Documentary of the Year by the Producer’s Guild of America (PGA). Marius was a producer on "LIKE CRAZY," the Sundance Film Festival Grand Jury Prize-winning film starring Anton Yelchin, Felicity Jones and Jennifer Lawrence which was distributed internationally by Paramount Pictures. He produced the Sundance film "DOUCHEBAG" which was Drake Doremus' directorial debut, as well as the film "1 NIGHT" directed by Minhal Baig. Marius served as Associate Producer on "THE WAY BACK," a feature film from Academy Award-nominated director Peter Weir. Marius received a Master’s in Fine Arts (MFA) from UCLA's School of Theater, Film and Television in Los Angeles. Marius' current projects in production include a documentary film about the Belarusian independence movement and also a documentary series on UFC champion MMA fighter Rose Namajunas.

Ben York Jones is a screenwriter, filmmaker, and TV creator based in Los Angeles. His screenwriting and producing credits include LIKE CRAZY (2011 Sundance Film Festival Best Picture Winner), BREATHE IN, ASHES IN THE SNOW (Based on the NYT Bestseller), NEWNESS, and the forthcoming HELLO, GOODBYE & EVERYTHING IN BETWEEN (Based on the book). Jones also Co-Created and Executive Produced the 1990s-set, coming-of-age Netflix Original Series EVERYTHING SUCKS! which premiered in February of 2018.