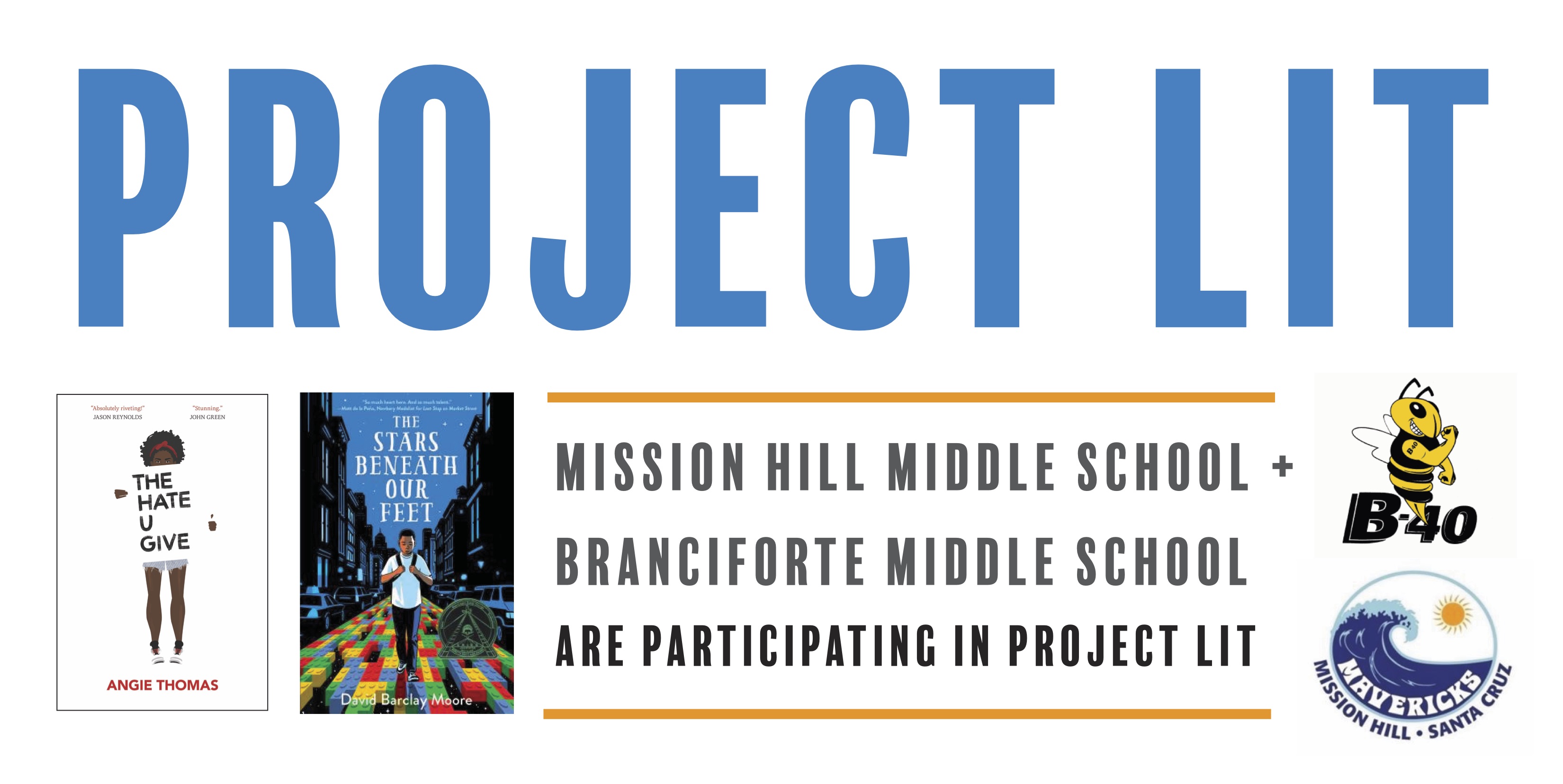 Project LIT is a national LITeracy movement that is committed to increasing access to culturally relevant books and promoting a love of reading in our schools and communities.

OUR GOAL: We want as many people as possible to participate in Project LIT to have the opportunity to read The Stars Beneath Our Feet and The Hate U Give AND see the movie when it’s released in October.

How Can You Get Involved?

The Stars Beneath Our Feet by David Barclay Moore

*Gr 5-8 –Twelve-year-old Lolly, a resident of Harlem’s St. Nicholas projects, has had a tough few months. His older brother, Jermaine, died as the result of gang-related violence. Still reeling from grief, Lolly now must contend with two neighborhood teens who’ve begun following, threatening, and stealing from Lolly and his best friend Vega. Following in his brother’s footsteps and taking violent revenge is tempting. His obsession with LEGOs and a burgeoning dream of becoming an architect just might see Lolly through, though, especially after his mother’s girlfriend starts bringing him garbage bags full of bricks from her job in a toy store. This gift prompts Lolly to begin building a huge LEGO city, one that quickly outgrows his apartment and has to be moved to the storage room of the community center, where he strikes up a friendship with Rose, a girl with autism who shares his passion for building. (from School Library Journal)

The Hate U Give by Angie Thomas

*Gr 8-up – Sixteen-year-old Starr Carter moves between two worlds: the poor neighborhood where she lives and the fancy suburban prep school she attends. The uneasy balance between these worlds is shattered when Starr witnesses the fatal shooting of her childhood best friend Khalil at the hands of a police officer. Khalil was unarmed. Soon afterward, his death is a national headline. Some are calling him a thug, maybe even a drug dealer and a gangbanger. Protesters are taking to the streets in Khalil's name. Some cops and the local drug lord try to intimidate Starr and her family. What everyone wants to know is: what really went down that night? And the only person alive who can answer that is Starr. But what Starr does-or does not-say could upend her community. It could also endanger her life.

Branciforte Middle School THE STARS BENEATH OUR FEET Donation

Mission Hill Middle School THE STARS BENEATH OUR FEET Donation

Branciforte Middle School THE HATE U GIVE Donation

Mission Hill Midlle School THE HATE U GIVE Donation