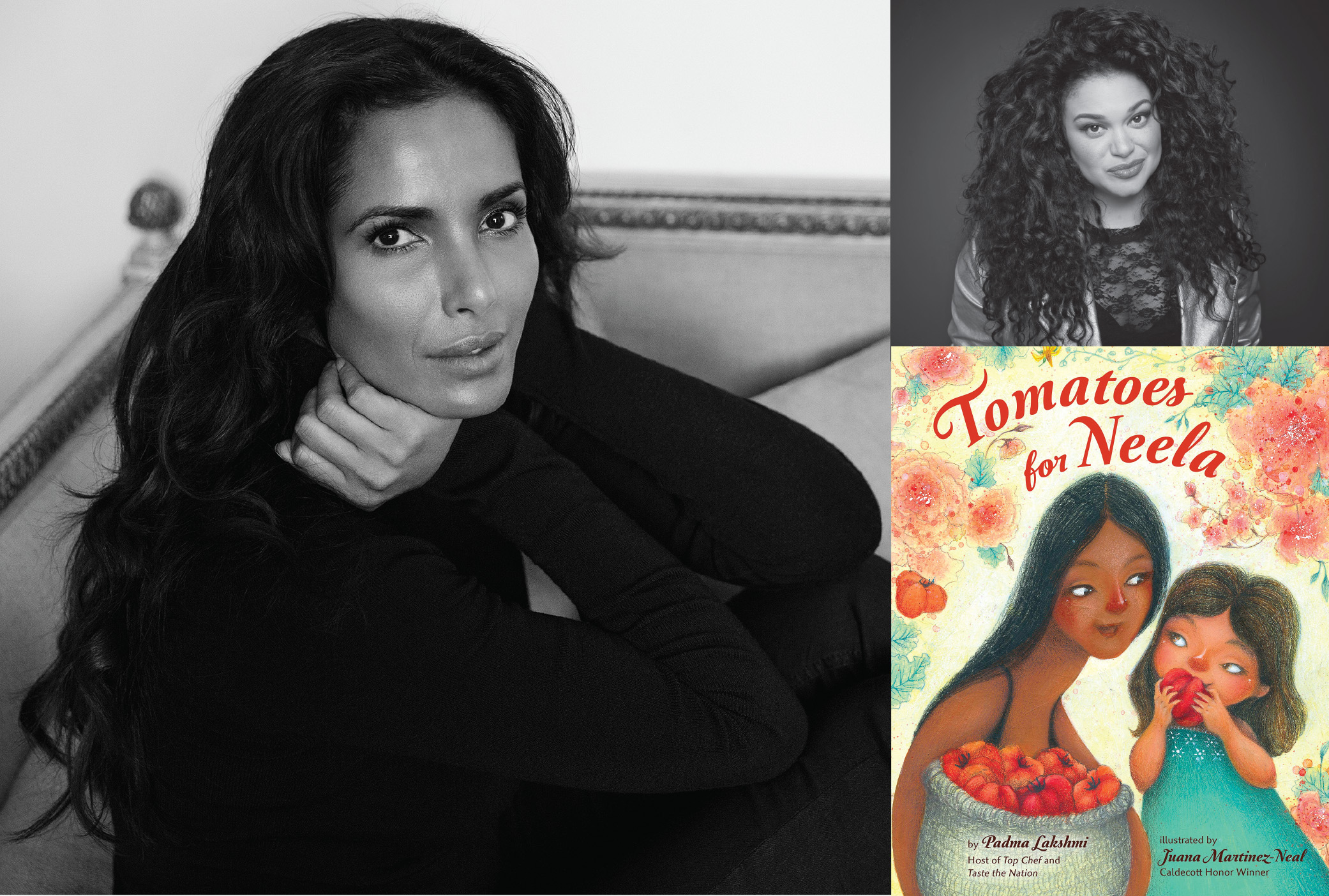 TICKETED VIRTUAL EVENT: Bookshop Santa Cruz is delighted to welcome Padma Lakshmi, bestselling author and host of Bravo's Top Chef and Hulu's Taste the Nation, for an online event to share her new picture book Tomatoes for Neela, a celebration of food and family, illustrated by Caldecott Honor-winning illustrator Juana Martinez-Neal. Lakshmi will be in conversation with actress and comedian Michelle Buteau. Tickets include a donation to FoodWhat?!, a local empowerment and food justice organization where youth engage in relationships with land, food, and each other in ways that are grounded in love and rooted in justice.

GET YOUR TICKETS FOR THIS SPECIAL VIRTUAL EVENT HERE.

"Some of my fondest memories from childhood are of cooking with the women in my family. It is the foundation for all I have spent my life working on." —Padma Lakshmi

Neela loves cooking with her amma and writing down the recipes in her notebook. It makes her feel closer to her paati who lives far away in India. On Saturdays, Neela and Amma go to the green market and today they are buying tomatoes to make Paati's famous sauce. But first, Neela needs to learn about all the different kinds of tomatoes they can pick from. And as Neela and Amma cook together, they find a way for Paati to share in both the love and the flavors of the day.

Bestselling author and host of Bravo's Top Chef and Hulu's Taste the Nation Padma Lakshmi takes young readers on an intergenerational journey full of delicious flavors and fun food facts that celebrates a family's treasured recipes. And Caldecott Honor-winning illustrator Juana Martinez-Neal brings this circle of women to life with vivid detail and warmth. Tomatoes for Neela lovingly affirms how we can connect to other cultures, as well as to our own, through food.

Padma Lakshmi is the creator and host of Hulu's Taste the Nation and host and executive producer of the Emmy-winning Bravo series Top Chef. She is the bestselling author of two cookbooks, the Encyclopedia of Spices and Herbs, as well as her memoir Love, Loss, and What We Ate. Lakshmi is also cofounder of the Endometriosis Foundation of America, an artist ambassador for the ACLU, and a Goodwill Ambassador for the United Nations. She lives in New York City with her daughter. Her favorite kind of tomato is a San Marzano.

Born in New Jersey to Caribbean parents, actress/comedian Michelle Buteau brings her unique perspective and big personality to stage and screen. Michelle returns as the host of the popular Netflix series THE CIRCLE and is also one of the stars of the TV remake of FIRST WIVES CLUB, which premiered its second season on BET+ in July 2021. Other film and TV credits include scene-stealing scenes in ALWAYS BE MY MAYBE, AWKWAFINA IS NORA FROM QUEENS, RUSSIAN DOLL, SOMEONE GREAT and the upcoming MARRY ME with Jennifer Lopez. Michelle’s one-hour comedy special WELCOME TO BUTEAUPIA is streaming on Netflix and recently won the Critics Choice Award for Best Comedy Special. Simon & Schuster published her autobiographical book of essays SURVIVAL OF THE THICKEST in December 2020.