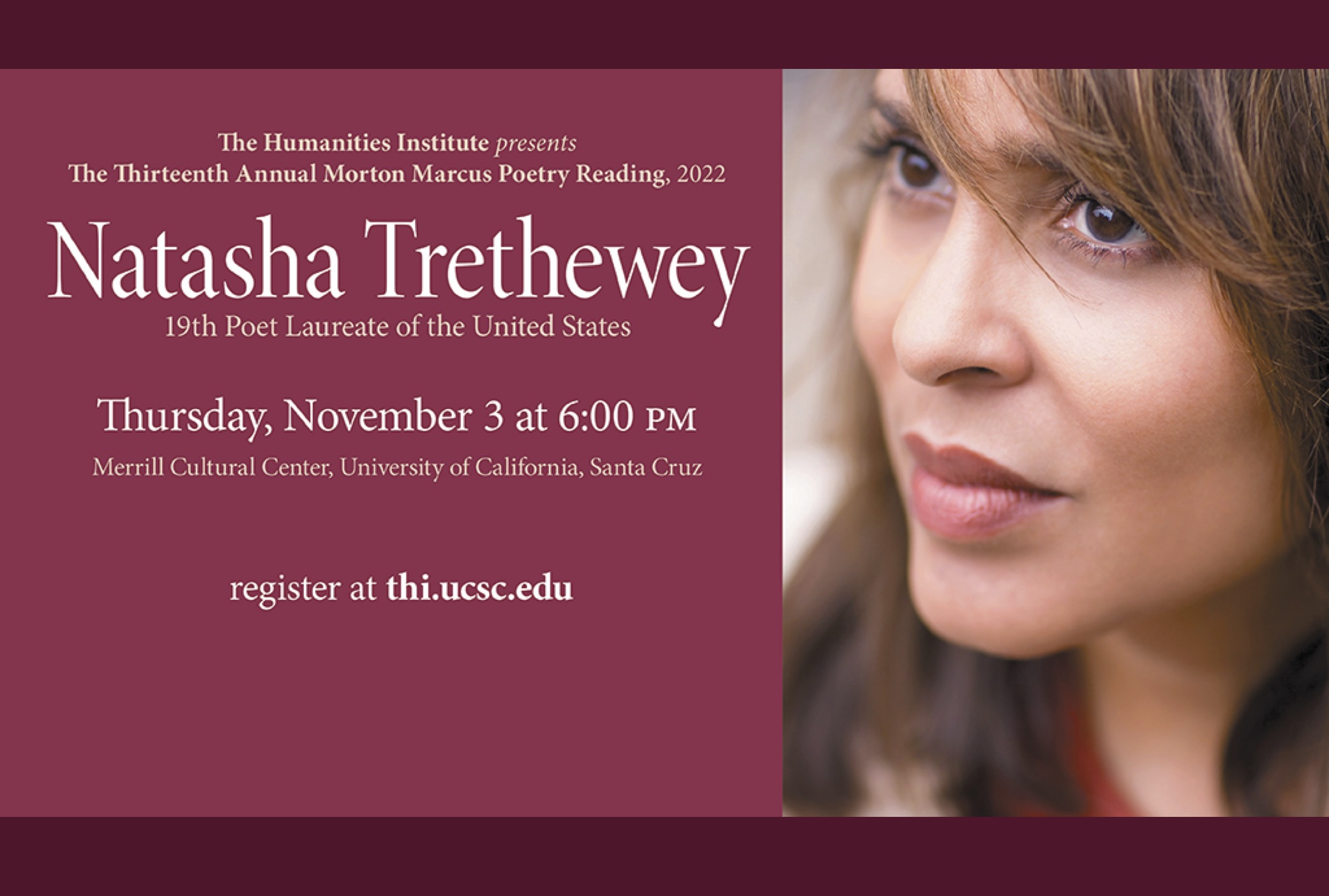 This event will take place at Merrill College Cultural Center.

This community event is presented by the The Humanities Institute and co-sponsored by:

Natasha Trethewey served two terms as the 19th Poet Laureate of the United States (2012-2014). She is the author of five collections of poetry, Monument (2018), which was longlisted for the 2018 National Book Award; Thrall (2012); Native Guard (2006), for which she was awarded the Pulitzer Prize, Bellocq’s Ophelia (2002); and Domestic Work (2000), which was selected by Rita Dove as the winner of the inaugural Cave Canem Poetry Prize for the best first book by an African American poet and won both the 2001 Mississippi Institute of Arts and Letters Book Prize and the 2001 Lillian Smith Award for Poetry. She is also the author of the memoir Memorial Drive (2020). Her book of nonfiction, Beyond Katrina: A Meditation on the Mississippi Gulf Coast, appeared in 2010. She is the recipient of fellowships from the National Endowment for the Arts, the Guggenheim Foundation, the Rockefeller Foundation, the Beinecke Library at Yale, and the Bunting Fellowship Program of the Radcliffe Institute for Advanced Study at Harvard. At Northwestern University she is a Board of Trustees Professor of English in the Weinberg College of Arts and Sciences. In 2012 she was named Poet Laureate of the State of Mississippi and and in 2013 she was inducted into the American Academy of Arts and Sciences.

Gary Young is the author of several collections of poetry. His most recent books are That’s What I Thought, winner of the Lexi Rudnitsky Editor’s Choice Award from Persea Books, and Precious Mirror, translations from the Japanese. His other books include Even So: New and Selected Poems; Pleasure; No Other Life, winner of the William Carlos Williams Award; Braver Deeds, winner of the Peregrine Smith Poetry Prize; Days; The Dream of a Moral Life, which won the James D. Phelan Award; and Hands. He has received a Pushcart Prize, and grants from the National Endowment for the Humanities, the National Endowment for the Arts, the California Arts Council, and the Vogelstein Foundation, among others. In 2009 he received the Shelley Memorial Award from the Poetry Society of America. Young was the first Poet Laureate of Santa Cruz County, and in 2012 he was named Santa Cruz County Artist of the Year. Since 1975 he has designed, illustrated, and printed limited edition letterpress books and broadsides at his Greenhouse Review Press. His fine print work is represented in numerous collections including the Museum of Modern Art, the Victoria and Albert Museum, The Getty Museum, and special collection libraries throughout the U.S. and Europe. He teaches creative writing and directs the Cowell Press at UC Santa Cruz.

That's What I Thought: Poems (Paperback)