First place winner of Bookshop's annual short story contest, 2018.
This story will also be published in our 2018 Summer Newsletter.

It was September 30th, 1955. I was 6 years old. I remember it always as the night James Dean was killed in a car crash somewhere in a place called California, and how my sister cried for hours on her bed, first sobbing loudly into her pillow, then tapering off into hiccoughing staccato breaths punctuated occasionally by a long low wail.

My mother said to just let her be, so I walked outside into the friendly cool of that Miami evening, watching fireflies wink on and off, listening to the hum of the neighbors’ televisions form a soothing background of sound.

His cigar-tip was like a large dragon’s eye across the patio, and I wandered over and sat down, wordlessly, on the grass, next to his aluminum folding-chair. He was often out here as evening approached, sitting quietly alone, smoking and gazing up at the stars. I never knew where he went during the day, but I would see him trudging homeward, tired and worn, his boots dusty, and the straw hat he always wore banded with darkened sweat-stains.

My pale skinny arms conducted mosquitoes, playing the nightly game of “catch me if you can.” He nodded to me silently, pulling on his cigar, serious yet amicable, and we shared the night dropping down upon us.

His grey hair was cropped short, looking like it had recently been cut with blunt scissors, his clean but faded denim jeans soft in the failing light. His lean face was brown and wrinkled around the eyes and the sides of his wide mouth and I felt as if we had been talking for hours that night though we hadn’t yet spoken. He would press his hands down upon his knees, his tanned fingers splayed wide while he sat. Sometimes, he’d talk in a mixture of low lilting Spanish, which sounded to me like soft music in a song, and English words, the thin gold band of his too-big wedding ring sliding up and down his finger while his hands moved slowly.

He never talked down to me nor used that manner that many grown-ups used, raising the timbre of the voice to sound like they were speaking to puppies or poor pitiful creatures.

“You are troubled. Tell me, Chiquita…” his quiet voice spoke, breaking the reverie.

“Someone has died today in a car crash.” I answered, haltingly, the memory of my sister’s tears and thoughts of dying fresh in my mind.

“Did you know him?” he asked quietly.

“No, he was famous. But my sister loved him.”

“Oye!” he said. “Listen to the wind tonight. And watch the stars. He will be up there soon.”

I lifted my face to look up at the sky, watching the stars appear as if on command, counting them slowly but realizing, as more and more became visible as the night darkened, that I would never know which ones were new ones. I lost count after a while.

“How will I know if he has become a new star?”

“You won’t. God will know and will take him in.” He sat and smoked, the night slowing, broken only by the striping of the white beams from passing cars, leaving us in blacker darkness than before. I thought about what he had said and if becoming a new star would happen to everyone when they died.

“Adios, Querida.” he answered and gently touched my white-blond head with his kind hands.

“Where were you?” my mother’s voice greeted me when I returned to the lighted room of our small apartment.

“Talking to Maria’s grandfather. He’s outside again, sitting in the dark.”

She was folding the shirt she had just ironed across the back of our one good chair and turned to look at me.

“How silly of you. He’s deaf. I thought you knew.” she told me.  “Wounded in the war. A mine field. He hasn’t spoken in years, his daughter said. He just walks. Strange old man.” And she bent over the next piece to iron from her basket, holding the spray bottle up.

I thought about correcting her, telling her that he could hear, that we had spoken occasionally for many months but decided, as I climbed up on the lid of the toilet seat to brush my teeth in the bathroom mirror, that it was all right not to. I marveled that she could be wrong about something so important but chose to keep this, my first secret ever, all to myself, separate from her. This had been an amazing evening, first with the reality of death invading my life through my sister’s sorrow, and now, this idea that even grownups would keep secrets, as Maria’s grandfather had, from his family. Up until now, I had thought families shared their personal lives completely. I swore I would not break his trust in me.

As I got ready for bed, I glanced over at my sister, fast asleep on the pale-green Chenille bedspread on her twin bed, her fourth finger stuck into her mouth and her pillow showing damp spots under her hand.

I thought about the round red-eyed image of his cigar-tip and the flickering shadows across the bridge of his straight nose and how he had sat, companionably, looking up with me and counting softly in Spanish until the remembered measured murmur of his voice lulled me into a deep and peaceful sleep. 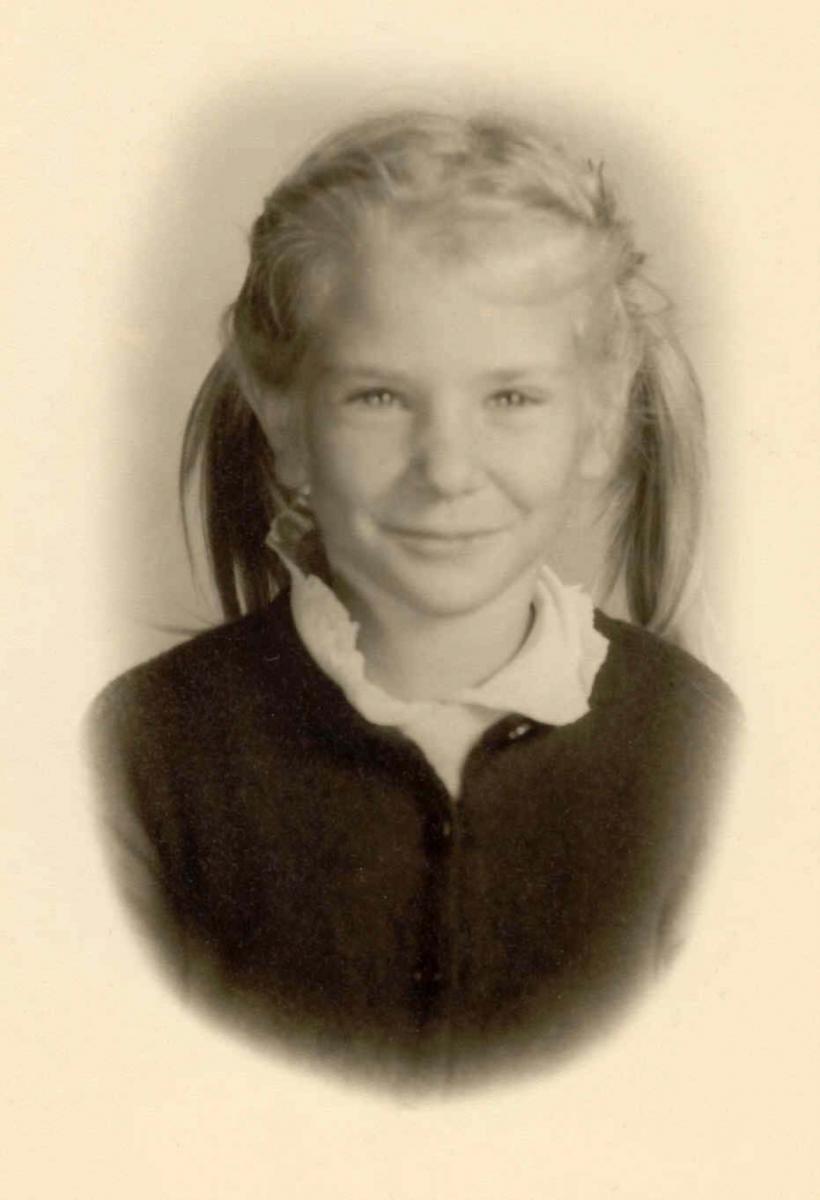 About Nancy Hofmann: "I have been a writer since I learned to spell and am a 4th generation and 30 year-credentialed teacher in Santa Cruz county, an multi-award winning poet, and I currently lead a monthly group of community writers of true stories that will celebrate our 9th anniversary in June! I believe that we all have amazing true stories to share and we present a safe and supportive space for the telling of many of our most heartfelt moments. "Maria's Grandfather" is just one of my true tales!"

The author at 6 years old.