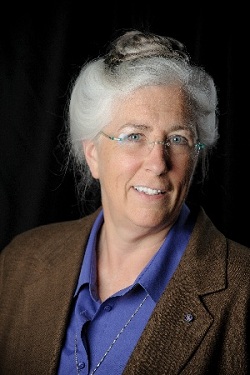 In bestselling author Laurie King’s brilliant new stand-alone novel, Lockdown, she deftly weaves many threads into one finely crafted tale. Lockdown is very different from King’s much beloved Mary Russell novels. Not only is Lockdown set in the present day in a fictionalized Watsonville, the story is told through alternating perspectives from a number of characters and skips back and forth in time. Lockdown is an utterly gripping thriller that will keep you in suspense until the powerful end. As a Pajaro Valley native and a huge fan of Laurie King’s, I was delighted to chat with her about her writing process, her novel, and the Pajaro Valley.

Flannery: I have to admit, I stayed up half the night reading Lockdown. I’m in love with it. It’s very different from the Mary Russell stories in a lot of ways. How is writing a stand-alone book like this different from writing that series? How did the book come about?

Laurie: I have been writing Lockdown since 2001 in one form or another. It’s based on half a dozen short stories I wrote over the years, none of them connected except in my own head. I mentioned the project to my editor, who said they wouldn’t want to do an anthology. I told her they were pieces of backstory, but not until I added the material that tied it all together did she fall in love with it. The book is a mosaic of stories. There were six originally, with two left out for various reasons, and the four woven into the main story. For example, I wrote the Gordon story for a friend who wanted a story set in a wild place—Papua New Guinea.

The Nick story was interesting. I was named Santa Cruz artist of the year in 2006, and I asked if, instead of talking about being a writer, I could simply write. They looked at me like, “What?” I proposed instant fiction: give me some ideas and let’s see what happens. The only thing I had in mind beforehand was the Redmond House, off Highway 1 in Watsonville—I wanted to write about that house. I based the rest of the story on prompts we asked kids to send in. I was given their suggestions that morning, and a couple hours later I set up my laptop in a conference room and wrote, while an audience watched on a screen in another room. Every time I hit Save, a section would appear. I wrote for two hours, roughly half the story that was later published as “The House.” The Nick story came from that (although he was originally called Bradley) and eventually I broke it apart and fitted its pieces together with other stories into the novel. A whole image made out of pieces: that’s a mosaic.

Flannery: One of the things that I love about your stories is your characters. They’re always so complex and real. Do you have a process for that kind of character creation?

Laurie: The voices in my head? (Listen to the voices!) I don’t know that I have a deliberate process for doing it. Sometimes I’ll realize a character is kind of flat, or that two blend into each other. That happened with two girls in Lockdown, until I made one more visible physically—Mina became an eighth-grade Goth. If you have a character who isn’t completely vivid, you look at their characteristics to see how to make them more visceral. Mina is a girl pushed to the outside, so she embraces being different.

And of course lots of things you know about characters don’t make it into the book—there’s a fine line between vivid detail and overwhelming the reader.

Flannery: I’m always impressed by how you manage to have a complex plot, layered characters, and still don’t ever dump too much on your reader.

Laurie: It’s the craft of writing. I have the advantage of being traditionally published: I have an editor who is paid to be hard on me. I find it tough to edit my own stuff with any degree of objectivity. For instance, the story of the janitor in Lockdown. In the original short story, there’s a dead dog. My editor said no, you just can’t. For one thing, people don’t like dead dogs. But it also nudges off the balance in that particular part of the novel. Now, in the original, the poor dog had to die, but not when woven into a bigger story. I found that fascinating.

Flannery: The town in Lockdown is based on Watsonville. I grew up in Watsonville, and I loved feeling the town as I read the book.

Laurie: The book is permeated by Watsonville, from 30 years of living in the Pajaro Valley. I love how real that farm community is. I miss that in Santa Cruz. Santa Cruz is a different state of mind. In Watsonville everyone pays attention to what’s growing and how to earn money off the land. Real things. Lockdown couldn’t really be a Santa Cruz book.

Flannery: I agree. You really captured the town. I could smell the vinegar as I read.

Laurie: I remember during the earthquake. I was downtown because my son had soccer. After it hit, for a day, the whole town smelled like vinegar.

Flannery: What are you reading right now?

Laurie: Nonfiction—research for the next Mary Russell novel. I’m also looking forward to Cory Doctorow’s book, and I loved John Scalzi’s Collapsing Empire—I’m so sorry I was away when Bookshop hosted them together on stage together in April!

Flannery Fitch is the manager of Bookshop’s used book buying desk. Her life has been about books since before she could read.