VIRTUAL EVENT: Zoom Forward! In Celebration of the Muse 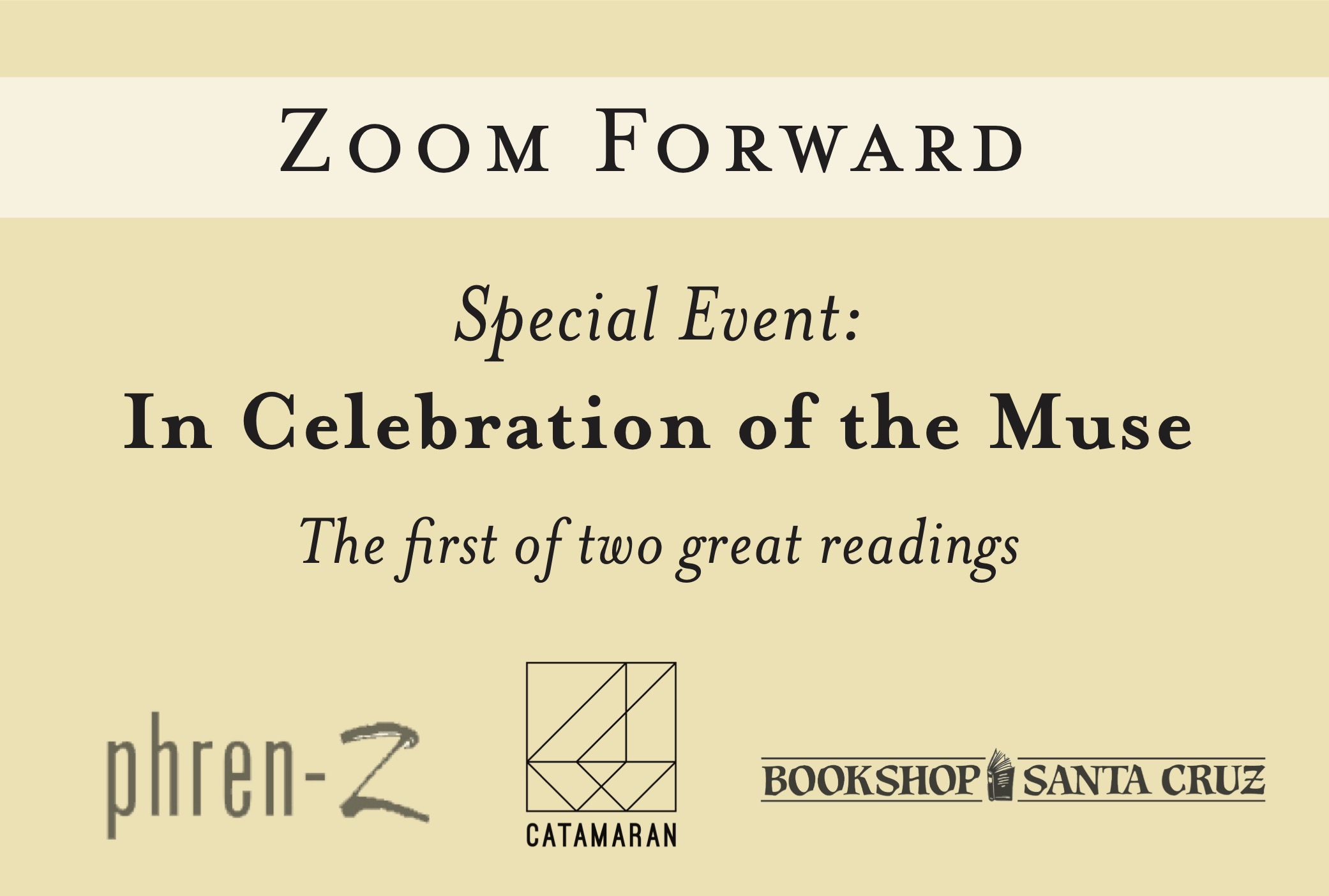 VIRTUAL EVENT: Zoom Forward! In Celebration of the Muse

Farnaz Fatemi is a founding member of The Hive Poetry Collective, which produced podcasts and poetry-related events in Santa Cruz. Her book of poems "Sister Tongue” won the 2021 Stan & Tom Wick Poetry Prize selected by Tracy K. Smith, and is forthcoming in August from Kent State University Press. Her work has appeared in Catamaran Literary Reader, Crab Orchard Review, Grist Journal and many more, including several anthologies.

Cynthia White’s poems have appeared in Adroit, Narrative,
Massachusetts Review, and ZYZZYVA among others. Her work can be found in numerous anthologies, including “Grabbed: Poets and Writers on Sexual Assault, Empowerment, and Healing.” She was a finalist for The Slapering Hol 2021 Chapbook Prize and the winner of the Julia Darling Memorial Prize from Kallisto Gaia Press. She lives in Santa Cruz.

Kit Birskovich has taught piano for 33 years in her studio in Santa Cruz; pianist, harpsichordist, accompanist, soprano, ceramicist, and she likes to think also poet, composer, gardener, painter, photographer, and chef. She received an MA in Piano Performance from the University of Iowa, where she also attended classes in creative writing. Her proudest achievement, not counting her two successful, brilliant, and honorable sons, is her founding and 27-year directing of Opportunity Grant scholarships -- under The Music Teachers' Association of California for music lessons for school-age students in Santa Cruz County, based on financial need and enthusiasm. She recently adopted a senior little dog, Marty. He is soft, quiet, loyal, and makes sure she never wakes up alone.

Paola Bruni is a writer, wife, and doggie mom living on California’s Central Coast. She is a two-time Pushcart Prize nominee, winner of the Morton Marcus Poetry Prize, and winner of the Muriel Craft Bailey Poetry Prize judged by Ellen Bass, as well as a finalist for the Mudfish Poetry Prize. Her poems have appeared in such journals as The Southern Review, Ploughshares, Five Points Journal, Rattle, and Catamaran Literary Reader, among others. Her debut book of poetry, How Do You Spell the Sound of Crickets, is an epistolary collection written with the late Jory Post. It will be published in May of 2022 by Paper Angel Press.

Dion O'Reilly’s debut book, Ghost Dogs, (Terrapin 2020) was shortlisted for several prizes including The Catamaran Prize and The Eric Hoffer Award. Her work appears in The Sun, Rattle, Cincinnati Review, Narrative, Salamander, Missouri Review, and The New Ohio Review. Her second book Sadness of the Apex Predator was chosen for the 2024 Portage Poetry Series out of University of Wisconsin's Cornerstone Press. She facilitates workshops with poets from all over the US and hosts a poetry podcast at The Hive Poetry Collective. Learn more at dionoreilly.wordpress.com

Laurel Maxwell is a writer based in Northern California whose poetry is inspired by the natural world (especially the ocean) while also taking inspiration from the seemingly mundane. Laurel has twice been a featured reader in Celebration of the Muse, a local celebration of women poets and has appeared online at baseballballard.com. When not writing Laurel enjoys being outdoors, reading, and traveling.

Mary Camille Thomas is a native of Santa Cruz who considers herself lucky to have returned after living in Davis, Germany, Los Angeles, Holland, and on the road. A college librarian by profession, she uses writing as a tool to navigate our crazy consumer culture constantly bombarding us with demands and desires. How do we balance the competing demands in our lives? She explores possibilities in poems and micro essays on her blog “The Kingdom of Enough”.

Jean Mahoney is a San Francisco native, grew up in Palo Alto, and has studied San Francisco and the greater Bay Area history for decades.  She is a writer, poet and award-winning educator whose writing has appeared in the Santa Cruz Sentinel and Sisters Singing: Blessings, Prayers, Art, Songs, Poetry and Sacred Stories by Women. Jean is the author of “Brave Hearts- A San Francisco Story- The Grit and Dreams of an Irish Immigrant Family” published in 2019.  This historical narrative follows the lives of her ancestors who immigrated from Ireland in the 1850’s to the tales of her grandparent’s adventures in the San Francisco Bay Area. Jean taught sixth grade in public schools in Santa Cruz for twenty years, and worked as a pioneer in environmental education and the movement for Life Lab school gardens.  She later helped to design and present teacher training programs in the California Environmental Education Initiative curriculum.

Julia Chiapella’s poetry has appeared in Avatar Review, Edison Literary Review, Euphony Journal, I-70 Review, The MacGuffin, Midwest Quarterly, OPEN: Journal of Arts & Letters, The Opiate Magazine, phren-Z, Pirene’s Fountain, The Round, The Wax Paper, and West Branch among others. She co-founded Santa Cruz Writes and is the retired director of the Young Writers Program, which she established in 2012. She received the Gail Rich Award in 2017 for creative contributions to Santa Cruz County. Julia has taught as both a classroom teacher and a writing specialist and is a member of The Hive Poetry Collective.

Jean Walton Wolff is honored and grateful to be part of tonight’s In Celebration of the Muse. Happy 40th year! Jean’s writing has been appeared in West Magazine, the San Francisco Chronicle, Porter Gulch Review and on NPR.  Her book, Heaven is a Beach at Low Tide, is a collection of her essays, poetry, and fiction. Jean is the founder of Community Writers of Santa Cruz County.

Julie Murphy’s poems appear or are forthcoming in The New Ohio Review Online, The Atlanta Review, Massachusetts Review, The Buddhist Poetry Review, SWWIM, CALYX, The Louisville Review, and Common Ground Review, among other journals and anthologies. A licensed psychotherapist, Julie developed Embodied Writing™. She hosts radio programs for the Hive Poetry Collective on KSQD and is a founding board member of the Right to Write Press. She teaches poetry at Salinas Valley State Prison, currently with remote lessons. Julie lives in Santa Cruz County.