Tracy Chevalier, At the Edge of the Orchard 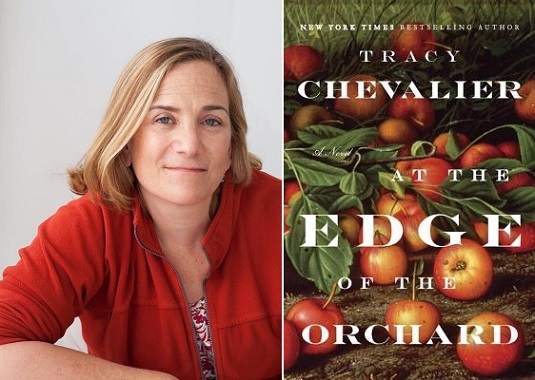 From Tracy Chevalier, the internationally bestselling author of Girl with a Pearl Earring, comes At the Edge of the Orchard, a riveting drama set in the 19th-century, following the Goodenoughs—a pioneer family on the American frontier as they struggle to survive life in the Black Swamp of northwest Ohio. From a familial battle over their apple orchard to the redwood and sequoia groves of California during the Gold Rush, Tracy Chevalier tells a fierce story in her most graceful and richly-imagined work yet.
1838: James and Sadie Goodenough settled where their wagon got stuck—in the muddy, stagnant swamps of Ohio. They and their five children work relentlessly to tame their patch of land, buying apple tree saplings from a traveling tree seller known as John Appleseed so they can cultivate the fifty apple trees required to keep their property. The orchard they plant sows the seeds of a long, vicious battle. James loves the apples, reminders of an easier life back in Connecticut; Sadie prefers the applejack they make, an alcoholic refuge from brutal frontier life. Ultimately, tempers flare to the point of no return resulting in tragedy for all concerned.
1853: Robert Goodenough, their youngest child, is wandering across America until he can’t go any further west, bringing him to the California Gold Rush. In the redwood and giant sequoia groves he finds some solace, collecting seeds for William Lobb, a naturalist, who sells and ships saplings of the giant trees from the new world to be planted on the great estates of England. Robert soon discovers that you can run only so far, even in America, and when his past makes an unexpected appearance he must decide whether to strike out again or stake his own claim to a home at last.

Tracy Chevalier is the New York Times bestselling author of seven previous novels, including Girl with a Pearl Earring, which has been translated into thirty-nine languages and made into an Oscar-nominated film. Born and raised in Washington, D.C., she lives in London with her husband and son.

At the Edge of the Orchard: A Novel (Hardcover)