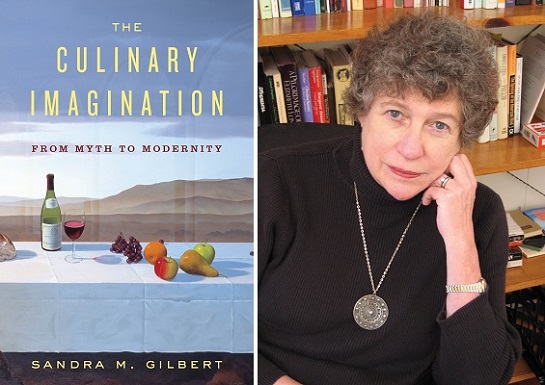 For the past thirty years, Sandra M. Gilbert’s poetry, criticism, and autobiographic writing has challenged the existing social structures and deepened our understanding of American culture. Now Gilbert brings her incomparable insights to help us understand why and how we read, write, and play with food.
Food fascinates just about everyone. It’s more than just sustenance. It’s pleasure, status, emotion, culture, and entertainment. From the celebrity chef cookbook and the food memoir (the “foodoir”) to the Instragrammed meal and the Slow Food craze, the spectrum of ways we obsess over food has made this a century of food. The kitchen is a paradoxically place of both glamour and domesticity.
In The Culinary Imagination, Gilbert provides the context for this romance between plate and mind. She looks at the many modes of food writing, from novelists and memoirists to poets and artists, examining our modern culinary musings within the frame of the cultural history that has shaped them. Our hungry culture—while rooted in centuries of culinary writing and painting—our recipe novels and poems, our food polemics (think Fast Food Nation and Food, Inc.), and our cooking programs represent a frenzy that’s both unprecedented and significant. In every meal we’re channeling memories and desires, joy and grief, and reminding ourselves of family and self, place and time.
Gilbert’s discoveries include Emily Dickinson’s recipe for Black Cake, Montaigne’s celebration of cannibals, Anthony Bourdain’s theatrics, and her own mother’s distinctive Sicilian spaghetti. She delights in the classic imaginations: a breakfast without food in Little Women, M. F. K. Fisher’s solo meals in Paris, death by poison in Madame Bovary, Warhol’s soup cans, and modernist William Carlos Williams’s poem about plums in an icebox. The Culinary Imagination is an essential, engaging take on our relationship to food, a must-read for any serious foodie.
In 2013, the National Book Critics Circle awarded Gilbert and Susan Gubar the Ivan Sandrof Lifetime Achievement Award, hailing both women as scholars whose books have changed the shape of literary criticism and influenced generations of students and scholars. Their seminal book, The Madwomen in the Attic (1979), single-handedly transformed the feminist movement. It continues to shape how we read the literary canon. Gilbert lives in Berkeley, California.
Welcome the esteemed Ms. Gilbert for a reading, Q&A, and book signing.
Author photo © Peter Basmajian

The Culinary Imagination: From Myth to Modernity (Hardcover)