Liza Monroy, Seeing as Your Shoes Are Soon to Be on Fire 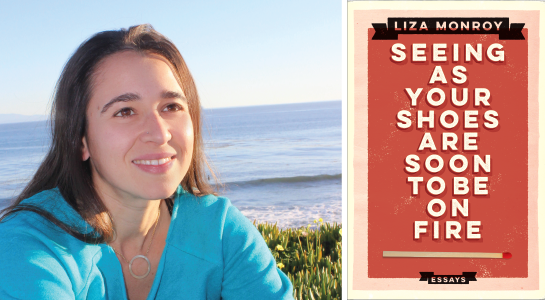 IN CONVERSATION WITH ELIZABETH MCKENZIE

Join us in celebrating the release of local author Liza Monroy’s new collection of essays Seeing as Your Shoes Are Soon to Be on Fire.

Liza Monroy’s new book is a collection of deeply personal essays that tackle the universal themes of romantic and familial love, fate and chance, all told in a humorous and intelligent manner that keeps the reader yearning for more. Created in the wake of Liza’s popular essays — including her piece for the Modern Love column in the New York Times — Seeing as Your Shoes Are Soon to Be on Fire chronicles Liza’s many misadventures in her quest for love. These misadventures span a variety of countries and a variety of men, all bound together under the watchful eye of her eccentric, single mother, a profiler for the U.S. State Department, who is soon using her professional aptitude to weed out the men in her daughter’s path.

Filled with quirky details and archetypal characters from our everyday lives, with stories that are both wildly hilarious and deeply heartfelt, Seeing as Your Shoes Are Soon to Be on Fire is both a vulnerably open testament to Liza’s personal experiences and an intriguing work that confronts the odds of finding love and intimacy in the increasingly depersonalized world of technology.

LIZA MONROY is the author of The Marriage Act: The Risk I Took to Keep My Best Friend in America… and What It Taught Us About Love and Mexican High. Her essays and articles have appeared in the New York Times, Los Angeles Times, Psychology Today, and Poets & Writers. Her work has also been featured in various anthologies, including Goodbye to All That: Writers on Loving and Leaving New York and One Big Family. Liza has taught writing at Columbia University, UCLA Extension, and UC Santa Cruz. She currently lives in Santa Cruz, California.

ELIZABETH MCKENZIE is the author of The Portable Veblen and Stop That Girl. Her work has appeared in The New Yorker, The Atlantic Monthly, Best American Nonrequired Reading, and the Pushcart Prize anthology, and has been recorded for NPR’s Selected Shorts. She received her MA from Stanford, was an assistant fiction editor at The Atlantic, and currently teaches creative writing at Stanford’s school of continuing studies. She lives in Santa Cruz.

Seeing As Your Shoes Are Soon to be on Fire: Essays (Paperback)