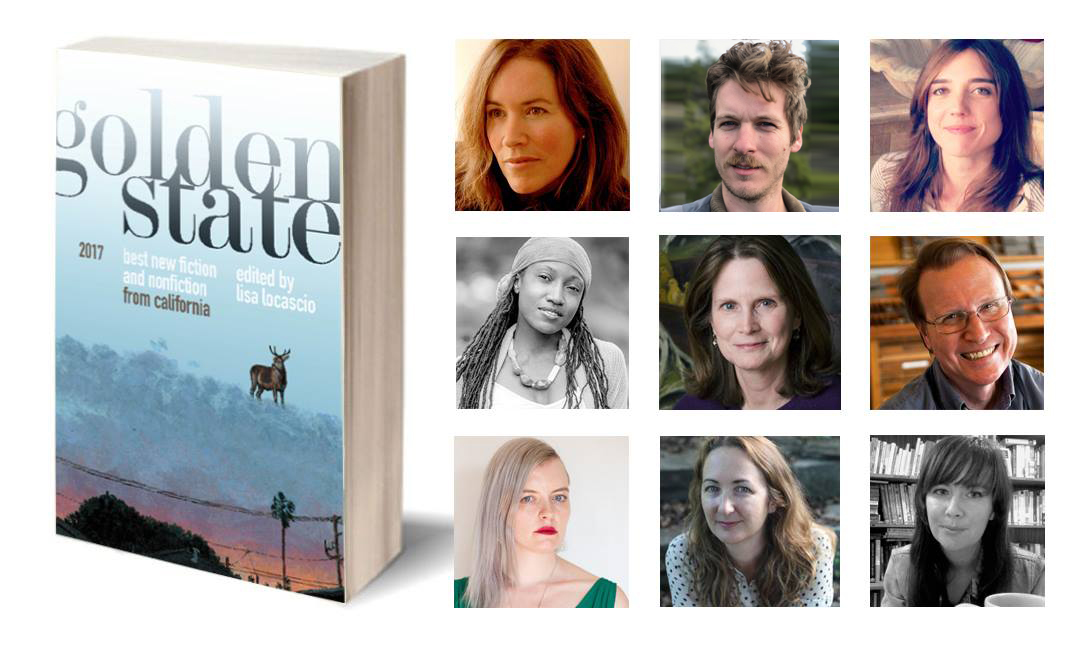 Bookshop Santa Cruz celebrates the release of Golden State 2017: The Best New Fiction and Nonfiction From California, the fourth volume in the series formerly known as California Prose Directory. Editor Lisa Locascio will host this event, and contributors Kat Meads, Micah Perks, Elizabeth McKenzie, Gary Young, Zoë Ruiz, Kate Folk, and Jasper Henderson will read from their anthologized work. Authors will be on hand to answer questions and sign copies of the book after the reading. This event will be the first stop on a tour of readings across California. Don't miss this unique gathering of local voices!

Kat Meads is the author of 16 books and chapbooks of poetry and prose, including 2:12 a.m. – Essays, recipient of an Independent Publishers Gold Medal (IPPY) and a ForeWord Reviews Book of the Year finalist. A native of North Carolina, she lives in the Santa Cruz Mountains and teaches in Oklahoma City University’s low-residency MFA program. “What Lies In Closets” first appeared in Crazyhorse.

Excerpts of Micah Perks’ third book What Becomes Us, published by Outpost19 in October 2016, won a National Endowment for the Arts Grant and The New Guard Machigonne 2014 Fiction Prize. Her short stories and essays have been published widely. She lives with her family in Santa Cruz where she co-directs the creative writing program at UCSC. More details and work at micahperks.com. “There Was Once A Man Who Longed For A Child” first appeared in Joyland.

Lisa Locascio is co-publisher of Joyland Magazine and editor of its California editions, as well as editor of the anthology Golden State 2017: Best New Writing from California (Outpost19) and of the ekphrastic collaboration magazine 7x7.LA. Her work has appeared in The Believer, Bookforum, Santa Monica Review, n+1, Tin House online, and many other magazines. She is Visiting Assistant Professor of Creative Writing at Wesleyan University and was recently named winner of the 2017 Penelope Niven International Literary Award for Creative Nonfiction. In 2018, Grove Atlantic will publish her debut novel, Jutland Gothic.

Gary Young’s books include Hands, The Dream of A Moral Life, Days, Braver Deeds and No Other Life, which won the William Carlos Williams Award. His most recent books are Even So: New and Selected Poems and Adversary. He teaches creative writing and directs the Cowell Press at the University of California Santa Cruz. In 2009 he received the Shelley Memorial Award from the Poetry Society of America. Selections from “At Sixty” appeared in Askew, Chicago Quarterly Review, 45th Parallel, Miramar, The New Flash Fiction Review, Ploughshares, phren-Z, Quarter After Eight, and String Town.

Zoë Ruiz lives and writes in Los Angeles. Her writing has appeared or is forthcoming in The Believer, The Rumpus, Salon, Ohio Edit, Two Serious Ladies, and the anthologies California Prose Directory (2014) and Rooted. She is also a book publicist and book editor, most recently ofNothing Ever Dies by Pulitzer Prize Winner Viet Thanh Nguyen, which made the 2016 National Book Award Longlist for nonfiction. Find her on twitter: @ruizzoe. “Summer” first appeared in Ohio Edit.

Kate Folk’s fiction has appeared in Conjunctions, Hayden's Ferry Review, Joyland, and Tin House online. She is a 2016-17 Affiliate Artist at the Headlands Center for the Arts. Originally from Iowa, she has lived in San Francisco since 2008. “Lost Horse Mine” first appeared in Juked. www.katefolk.com

Jasper Henderson is a writer and teacher from the Mendocino Coast. His work has appeared in the Noyo River Review and Permasummer. He publishes an occasional travelogue through his website, jasperhenderson.com. As a poet-teacher with California Poets in the Schools, he works with over 200 students every year. His cat is named Sybil, after the sibilant, favorite sound of cats across the galaxy.

Elizabeth McKenzie’s novel The Portable Veblen was published by Penguin Press in 2016. She is the author of the novel MacGregor Tells The World and Stop That Girl, short-listed for The Story Prize. Her fiction has been awarded a Pushcart Prize and has been included in The Atlantic, Best American Nonrequired Reading, and others. McKenzie is senior editor of the Chicago Quarterly Review and the managing and fiction editor of Catamaran Literary Reader. “Savage Breast” first appeared in The New Yorker.

Lyndsey Ellis is a St. Louis native who lives and works in Oakland. She received her MFA in Writing from the California College of the Arts in San Francisco. Ellis is a recipient of the 2016 Joseph Henry Jackson literary award from the San Francisco Foundation. She’s a VONA/Voice alumna and was a writer-in-residence at Vermont Studio Center. She’s currently working on her first novel.