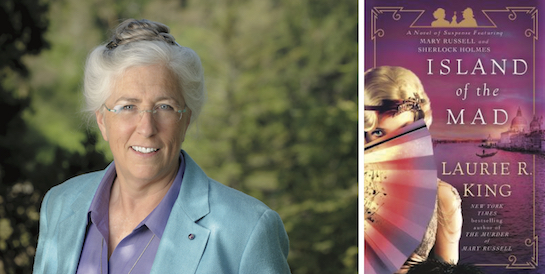 Bookshop Santa Cruz welcomes beloved and best-selling author Laurie R. King back to the store for a reading and signing of her new novel of suspense featuring Mary Russell and Sherlock Holmes, Island of the Mad. Venetian inspired refreshments will be served as we are transported into the world of Island of the Mad.

Mary Russell and Sherlock Holmes untangle the slippery threads of insanity and deadly secrets as they investigate a disappearance in the New York Times bestselling series that Lee Child called "the most sustained feat of imagination in mystery fiction today."

A June summer's evening, on the Sussex Downs, in 1925. Mary Russell and Sherlock Holmes are strolling across their orchard when the telephone rings: an old friend's beloved aunt has failed to return following a supervised outing from Bedlam. After the previous few weeks--with a bloody murder, a terrible loss, and startling revelations about Holmes--Russell is feeling a bit unbalanced herself. The last thing she wants is to deal with the mad, and yet, she can't say no.

The Lady Vivian Beaconsfield has spent most of her adult life in one asylum after another, yet she seemed to be improving--or at least, finding a point of balance in her madness. So why did she disappear? Did she take the family's jewels with her, or did someone else? The Bedlam nurse, perhaps?

The trail leads Russell and Holmes through a lunatic asylum's stony halls to the warm Venice lagoon, where ethereal beauty is jarred by Mussolini's Blackshirts, where the gilded Lido set may be tempting a madwoman, and where Cole Porter sits at a piano, playing with ideas...

LAURIE R. KING is the award-winning, bestselling author of fourteen Mary Russell mysteries, five contemporary novels featuring Kate Martinelli, and many acclaimed stand-alone novels such as Folly, Touchstone, The Bones of Paris, and Lockdown. She lives in Northern California, where she is at work on her next Mary Russell mystery.

This free event will take place at Bookshop Santa Cruz. Chairs for open seating are usually set up an hour before the event begins.

Island of the Mad: A novel of suspense featuring Mary Russell and Sherlock Holmes (Hardcover)