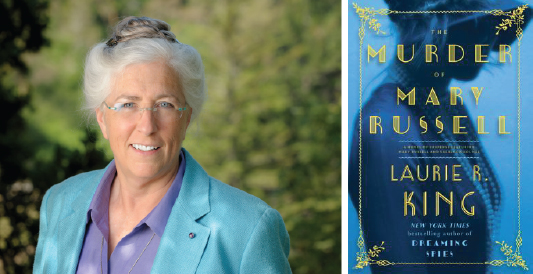 Online ordering has ended for this event.
If you would like to get a book and signing line voucher to attend the event with, please stop by Bookshop prior to the event, or call (831) 423-0900.
If you cannot attend the event, but would like a signed copy of THE MURDER OF MARY RUSSELL, please stop by prior to the event, or call (831) 423-0900 to purchase over the phone. Thank you!
Join Bookshop Santa Cruz to celebrate Laurie R. King’s perhaps most-anticipated mystery yet, with a reading and signing, plus special launch festivities and surprises.
Sherlock Holmes is back in the latest of this New York Times bestselling series that Lee Child has hailed as “the most sustained feat of imagination in mystery fiction today”—but where is Mary Russell?
Laurie R. King opens the next installment of her bestselling series with a blood-drenched carpet in 221B Baker Street—and no one knows the fate of Mary Russell. In what Kirkus is calling “a high point in King’s long-running series,” King continues to weave rich historical detail and provocative themes with enthralling suspense. But does this adventure end it all?
Mary Russell is used to dark secrets her own, and those of her famous partner and husband, Sherlock Holmes. Trust is a thing slowly given, but over the course of a decade together, the two have forged an indissoluble bond. And what of the other person to whom Mary Russell has opened her heart: the couple’s longtime housekeeper, Mrs. Hudson? Russell’s faith and affection are suddenly shattered when a man arrives on the doorstep claiming to be Mrs. Hudson’s son. What Samuel Hudson tells Russell cannot possibly be true, yet she believes him as surely as she believes the threat of the gun in his hand. In a devastating instant, everything changes. And when the scene is discovered a pool of blood on the floor, the smell of gunpowder in the air the most shocking revelation of all is that the grim clues point directly to Clara Hudson. Or, rather, to Clarissa, the woman she was before Baker Street.
The key to Russell’s sacrifice lies in Mrs. Hudson’s past. To uncover the truth, a frantic Sherlock Holmes must put aside his anguish and push deep into his housekeeper’s secrets to a time before her disguise was assumed, before her crimes were buried away.
Laurie R. King is the New York Times bestselling author of thirteen Mary Russell mysteries, five contemporary novels featuring Kate Martinelli, and the acclaimed novels The Bones of Paris, A Darker Place, Folly, Keeping Watch, and Touchstone. She lives in Northern California.

SIGNING LINE VOUCHER GUIDELINES: This event will take place at Bookshop Santa Cruz. Open seating begins at 5:30. There are no reserved seats. Reserve your spot in the signing line by purchasing your copy of The Murder of Mary Russell from Bookshop Santa Cruz prior to the event. Upon purchase you will receive a numbered signing line voucher. Voucher-holders will be called up to have books signed according to the number on their voucher. Those without prioritized signing numbers will be able to get books signed once all those with vouchers have been called up.