Julia Reynolds, Blood in the Fields 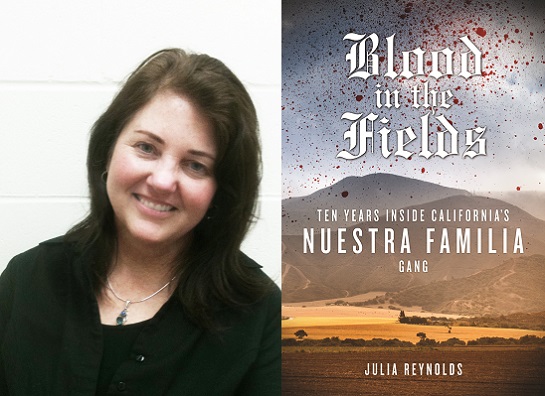 Salinas is home of Nuestra Familia, one of the most violent gangs in the United States. Born in the prisons of California in the late 1960s, Nuestra Familia expanded to control drug trafficking and extortion operations throughout the northern half of the state, and left a trail of bodies in its wake. Award-winning journalist Julia Reynolds tells the gang's story from the inside out, following young men and women as they search for a new kind of family, quests that usually lead to murder and betrayal.

Blood in the Fields documents the history of Operation Black Widow, the FBI's questionable decade-long effort to dismantle Nuestra Familia, along with its compromised informants and the turf wars it created with local law enforcement agencies. Reynolds uses her unprecedented access to gang members, both in and out of prison, as well as undercover wire taps, depositions, and court documents to weave a gripping, comprehensive history of this brutal criminal organization and the lives it destroyed.

Julia Reynolds is a reporter and editor who has done work for MediaNews newspapers, PBS, NPR, the Discovery Channel, The Nation, Mother Jones, the San Francisco Chronicle, 60 Minutes, and more. She has reported on gangs, crime and prisons, and co-produced the award-winning PBS documentary Nuestra Familia, Our Family, the work of 11 years of immersion in rural gang member’s lives. She was part of the team that created Frontline/WORLD’s much-heralded documentary Gun Runners. Previously, she was editor of the national Latino magazine el Andar. She is a Center for Conflict Studies Research Fellow at the Monterey Institute of International Studies and was a 2009 Nieman Fellow at Harvard and a 2011 Steinbeck Fellow at San Jose State University. She has won awards from the National Association of Hispanic Journalists, New California Media, the California Newspaper Publishers Association, The National Council on Crime and Delinquency, the World Affairs Council, and Investigative Reporters and Editors’ highest honor, the Tom Renner Medal.

Willie Stokes is the Executive Director and Founder of the Black Sheep Redemption Program, a non-profit organization that reaches out to young people who are struggling with addiction, gang involvement, and academic failure. Mr. Stokes uses his own life as an example of redemption, having experienced many of the struggles that youth face today. Growing up in Salinas, his childhood was one of turbulence, drugs, and rebellion, ultimately leading him to indoctrination as a gang member. In and out of correctional facilities for seventeen years, he saw the lies, hypocrisy, and greed which are the true driving forces behind gang warfare and the wasted destruction of so many young lives. He dedicated himself to reaching youth who are in jeopardy of falling victim to the same fate. Black Sheep Redemption Program helps youth develop a positive personal value system that will allow them to overcome the negative influences and peer pressure that surrounds them, instead of succumbing to self-destructive lifestyle choices.

Brian Contreras is one of the founders of Second Change Youth Program of Monterey County. Established in 1989 by a group of community members who lived in East Salinas, Second Chance was formed to address the cries for help from youth involved in violence and gang activity. Their services offer youth a second chance at life without judging, accusing, or pointing fingers; positive outlets in life other than gangs and drugs; and the opportunity to empower themselves, set goals, and make change.

Kelly McMillin has been the Chief of Police for the Salinas Police Department since 2011. His experience as a Salinas Police Officer has including patrol, gang units, vice/narcotics, administration, and various assignments as a detective including homicide. He was a SWAT operator, team leader, and tactical commander. Kelly implemented the department’s Ceasefire strategy and is the police department’s representative to the California Cities Gang Prevention Network and the National Forum for Youth Violence Prevention. He also oversees SPD’s many collaborations with nonprofits, faith groups, education, and CBOs.

J.D. Hillard directs news talk and information at Santa Cruz-based NPR affiliate KUSP Radio. HE oversees KUSP’s reporting on local topics, including the water planning series, “The Water Squeeze,” which earned a regional Edward R. Murrow Award. His work has aired on the California Report and NPR. Before working in radio he covered crime and public safety for the Watsonville Register-Pajaronian.