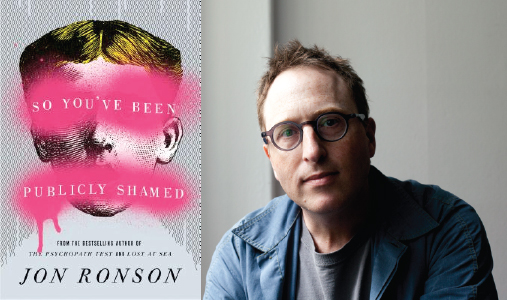 "This thought-provoking book makes you seriously think about the glee with which our society takes down those we perceive as societal offenders. Luckily, Ronson's humor makes what could have been a depressing, overly serious topic fascinating and readable." --Flannery, Bookshop Santa Cruz

From the internationally bestselling author of The Psychopath Test comes a captivating and brilliant exploration of shame--and its under-appreciated force in our culture.

A brief encounter with online impostors who appropriated his name and persona prompted Jon Ronson to explore the world of modern-day public shaming, and what he discovered astonished him. In this age, public ridicule can attack with shocking speed, from anonymous or distant sources, and transform and devastate the life of the target. Whole careers are being ruined by one mistake: A transgression is revealed, and collective outrage circles with the force of a hurricane. And then often we quickly forget about it and move on to the next one, and it doesn’t cross our minds to wonder whether the shamed person is okay or in ruins. What’s it doing to that person? What’s it doing to us?

Ronson travels around the world meeting famous shamees, shamers, and bystanders who have been affected. His journey results in an entertaining and eye-opening book about public shaming, and about shaming as a form of social control. So You’ve Been Publicly Shamed is a powerful, funny, unique, and very humane dispatch from the front line in the escalating war on human nature and its flaws.

Jon Ronson is a journalist, humorist, radio presenter, and filmmaker whose work has appeared in The Guardian, Time Out, BBC Television, and more. His books include The Psychopath Test and Lost at Sea: The Jon Ronson Mysteries and international bestsellers Them: Adventures with Extremists and The Men Who Stare at Goats. He cowrote the screenplay for Frank starring Michael Fassbender and Maggie Gyllenhaal, is a regular contributor to This American Life. Ronson lives in London and New York City.

Join us in welcoming a staff favorite for what will doubtlessly be a hilarious, enlightening evening!

So You've Been Publicly Shamed (Hardcover)