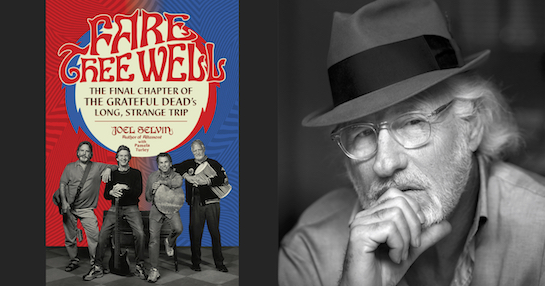 FARE THEE WELL is a tell-all biography of the epic in-fighting of the Grateful Dead in the years following band leader Jerry Garcia's death in 1995. The Grateful Dead rose to greatness under the inspired leadership of guitarist Jerry Garcia, but the band very nearly died along with him. When Garcia passed away suddenly in August of 1995, the remaining band members experienced full crises of confidence and identity. So long defined by Garcia's vision for the group, the surviving "Core Four," as they came to be called, were reduced to conflicting agendas, strained relationships, and catastrophic business decisions that would leave the iconic band in shambles. Wrestling with how best to define their living legacy, the band made many attempts at restructuring, but it would take twenty years before relationships were mended enough for the Grateful Dead as fans remembered them to once again take the stage.

Acclaimed music journalist and New York Times bestselling author Joel Selvin was there for much of the turmoil following Garcia's death, and he'll offer a behind-the-scenes account of the ebbs and flows that occurred during the ensuing two decades. Plenty of books have been written about the rise of the Grateful Dead, but this final chapter of the band's history has never before been explored in detail. Culminating in the landmark tour bearing the same name, Fare Thee Well charts the arduous journey from Garcia's passing all the way up to the uneasy agreement between the Core Four that led to the series of shows celebrating the band's fiftieth anniversary and finally allowing for a proper, and joyous, sendoff of the group revered by so many.

JOEL SELVIN is an award-winning journalist who has covered pop music for the San Francisco Chronicle since 1970. Selvin is the author of the bestselling Summer of Love and coauthor, with Sammy Hagar, of the #1 New York Times bestseller Red. He has written twelve other books about pop music. Selvin lives in San Francisco, California.

This event will be free at Bookshop Santa Cruz with open seating. Chairs for open seating are usually set up an hour before the event begins.