Felicia Day, You're Never Weird on the Internet (Almost) 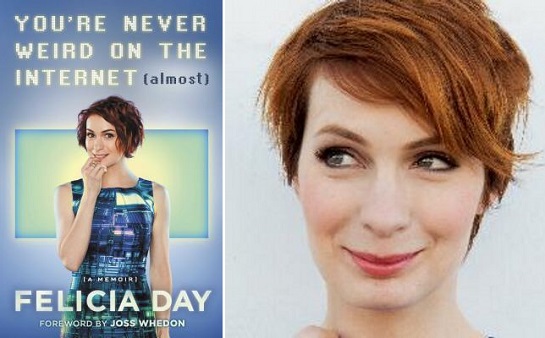 Bookshop Santa Cruz is very pleased to welcome an unequivocal staff favorite for a moderated audience Q&A and a book signing!

Growing up, being “homeschooled for hippie reasons” led Felicia Day to out-of-the-box enthusiasms like advanced calculus, noir films, fantasy novels, and role-playing video games. Typically typecast as “crazy cat lady secretary” and meeting dead ends pitching her script about a quirky group of gamers, she decided to adopt a do-it-yourself attitude and produce her own web series—launching The Guild and, ultimately, her career as one of the most influential creators in new media. Day’s inspirational memoir is proof that everyone should celebrate what makes them different and be brave enough to share their unique point of view with the world, because anything is possible—even for a digital misfit.

Candid and insightful about her unusual upbringing, her college years as a violin and math whiz, her early misadventures in Hollywood, and her unconventional rise to Internet-stardom, Day writes about how embracing individuality fuels creation, community, and innovation on the Internet and beyond. Ever-relatable, she also addresses the rough patches along the way, recounting her struggles with writer’s block, anxiety, and learning how to manage when overachieving becomes overwhelming. A success story for today’s connected culture, in which technology and entertainment are ever-changing, Day was empowered to ignore the traditional gatekeepers because the Internet provided tools to go around them.

Felicia Day has appeared in numerous mainstream television shows and films, including the SyFy series Eureka and a recurring role on The CW show Supernatural. However, she is best known for her work in the web video world, behind and in front of the camera. She co-starred in Joss Whedon’s Emmy Award-winning Internet musical, Dr. Horrible’s Sing-Along Blog. She also created and starred in the hit web series The Guild, which ran for six seasons and is available for viewing on every major digital outlet, including Netflix.

In 2012, she launched the YouTube channel Geek & Sundry, a hub for the geek community that celebrates individuals and fuels connections both online and in real life. Now with more than 1.3 million subscribers and over 200 million views, Geek & Sundry has produced the very best of indie geek culture, pioneering modern media consumption—and catalyzing a barrier-transcending online community exploring the verticals of comedy, gaming, comics, music, literature, and more. In 2014, the company was purchased by Legendary Entertainment; Day now acts as Geek & Sundry CCO. She was named to the Hollywood Reporter’s 2012 Next Generation list recognizing rising stars 35 and under in media. Her extremely active social media network includes over 2.3 million Twitter followers, is the founder of a romance and fantasy book club with over 13,000 members.