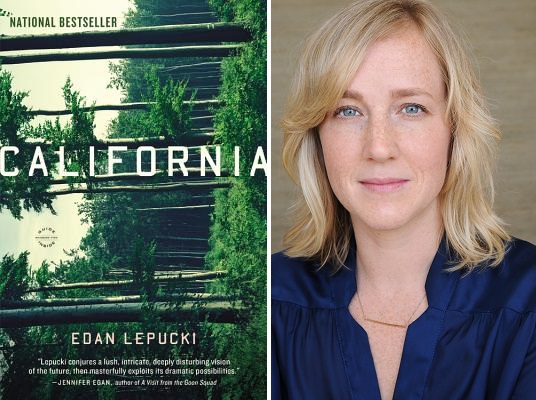 In conversation with Marie Mutsuki Mockett

The summer hit of 2014, an NPR best book of 2014, Sherman Alexie’s reading recommendation to Stephen Colbert, and the subsequent golden child of the famous “Colbert Bump” (Stephen Colbert’s campaign to promote authors and independent bookstores when Amazon threatened to block sales of Hachette books), California is the thrilling and provocative debut novel imagining a frighteningly realistic near future, in which clashes between mankind's dark nature and deep-seated resilience force us to question how far we will go to protect the ones we love.

Edan Lepucki’s debut novel immediately skyrocketed to the #3 spot on the New York Times Bestseller list, and became a #1 bestseller on the Los Angeles Times and San Francisco Chronicle bestsellers lists. Lepucki herself became American’s indie darling, heralded as one of the greatest new voices in fiction.

In this heart-wrenching novel, the world Cal and Frida has disappeared; they've left the crumbling city of Los Angeles far behind. They live in a shack in the wilderness, working side-by-side to make their days tolerable in the face of hardship and isolation. Mourning a past they can't reclaim, they seek solace in each other. But the tentative existence they've built for themselves is thrown into doubt when Frida finds out she's pregnant.

Terrified of the unknown and unsure of their ability to raise a child alone, Cal and Frida set out for the nearest settlement, a guarded and paranoid community with dark secrets. These people can offer them security, but Cal and Frida soon realize this community poses dangers of its own. In this unfamiliar world, where everything and everyone can be perceived as a threat, the couple must quickly decide whom to trust.

Eden Lepucki is a graduate of Oberlin College and the University of Iowa Writers’ Workshop, and her fiction and nonfiction have been published in Narrative Magazine, The New York Times, and McSweeney’s, among others. She is also the author of the novella If You’re Not Yet Like Me. and is a staff writer for The Millions. She founded and co-directs Writing Workshops Los Angeles.

Marie Mutsuki Mockett’s first novel, Picking Bones from Ash, was shortlisted for the Saroyan International Prize for Writing, and a finalist for the Paterson Prize. She has written for The New York Times, Salon, National Geographic, Glamour, among other publications, and has been a guest on Talk of the Nation and All Things Considered on NPR. She lives in San Francisco with her husband and son.

END_OF_DOCUMENT_TOKEN_TO_BE_REPLACED

VIRTUAL TICKETED EVENT: Michael Pollan, This Is Your Mind on Plants
07/06/2021 - 6:00pm
END_OF_DOCUMENT_TOKEN_TO_BE_REPLACED