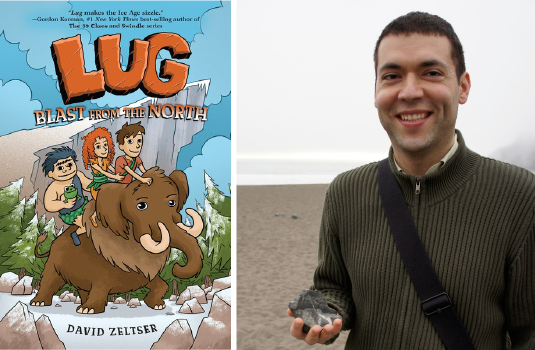 Join us in welcoming local author David Zeltser back to Bookshop Santa Cruz to celebrate the release of the second book in his LUG series, Blast from the North. Full of the same zany fun from the first book, Blast from the North offers a light and humorous read on the important topic of climate change.

After saving their clans from saber-toothed tigers, Lug and his friends now face an even deadlier foe: a giant and strangely fast-moving glacier from the north that threatens to crush their villages. But how do you stop a force of nature? As Lug, Echo and Stony investigate, they meet a mysterious boy named Blast. Although he says he has a plan to save everyone, Lug suspects this kid isn’t as cool as he seems. Full of humor, amazing creatures, daring escapes, and more of Lug’s adorable cave art; readers will cheer for Lug and his friends as they race against the melting glacier to save their world.

David Zeltser is the author of the middle grade novels LUG: Dawn of the Ice Age and Lug: Blast From the North. The books satirize mankind’s response to climate change and have been praised by Kirkus Reviews, School Library Journal and Al Gore, who called the first book “a great combination of humor and powerful insight.” David’s first picture book, Ninja Baby, was nominated for the Magnolia State Book Award, featured in USA Today, and received a starred review from Publishers Weekly, which called it “a funny and pitch-perfect story.” It was illustrated by Caldecott Honor-winning artist Diane Goode and published by Chronicle Books. David now has four picture books forthcoming from HarperCollins, Lerner, and Random House. He also has two film scripts in development with independent producers. He lives with his family and many barking sea lions in Santa Cruz, California.

Blast from the North (Lug #2) (Hardcover)