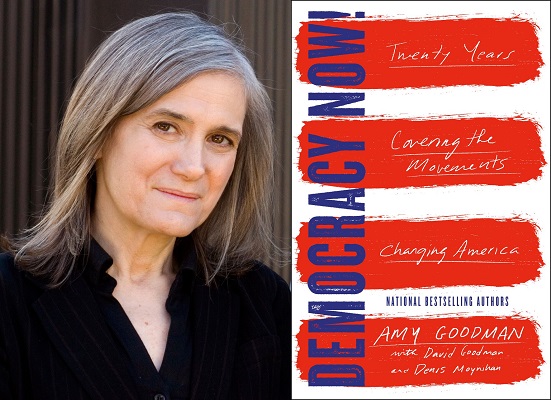 Online ordering has ended for this event. If you would like to secure your place in the signing line, please purchase a paperback copy of Democracy Now! from Bookshop Santa Cruz in person or by phone (831-423-0900) before the event begins at 3:00 pm. Open seating for this event will open at 1:45 pm.

Amy Goodman comes to Santa Cruz on Monday afternoon, May 15th, from 3:00-5:00 as part of the Democracy Now!: Covering the Movements Changing America A Talk by Journalist Amy Goodman tour, with the paperback release of her book, Democracy Now! This free, in-store event will include a book signing following Amy Goodman's talk of Democracy Now!, with signing line priority given to those who purchase a copy of the book. You can purchase your copy at Bookshop Santa Cruz, or online below.

From the standoff at Standing Rock over the Dakota Access Pipeline, to the voices of grassroots leaders; from Black Lives Matter activists to the stories of those fighting for peace, climate justice, migrant rights, and LGBTQ equality; from uncovering government surveillance to fighting attacks on freedom of the press, Democracy Now! has been reporting for two decades from the front lines of the movements that are changing America and changing the world.

In these times of war and elections, movements and uprisings, we need independent media more than ever. The commercial media serves as a mouthpiece for corporate and government interests--giving a platform to the pundits and the pollsters who know so little about so much, explaining the world to us and getting it so wrong.

Free speech is democracy’s last line of defense. We must demand it, defend it, and most of all, use it--now.

AMY GOODMAN is the host and executive producer of Democracy Now! a daily, global grassroots news hour, broadcasting on over 1,400 public television and radio stations around the U.S. and the world, with millions accessing it online at democracynow.org. An acclaimed international journalist, she has won the Right Livelihood Award, widely known as the Alternative Nobel Prize. Goodman is also the recipient of a lifetime achievement award from Harvard’s Nieman Foundation of Journalism, the George Polk Award, the Robert F. Kennedy Prize for International Reporting, and the Alfred I. duPont-Columbia Award. This is her sixth New York Times bestselling book.

Introduced by her co-author, Democracy Now!'s Denis Moynihan
DENIS MOYNIHAN has been working with Democracy Now! since 2000. He is a bestselling author and a King Features syndicated columnist. He lives in Colorado, where he founded community radio station KFFR.