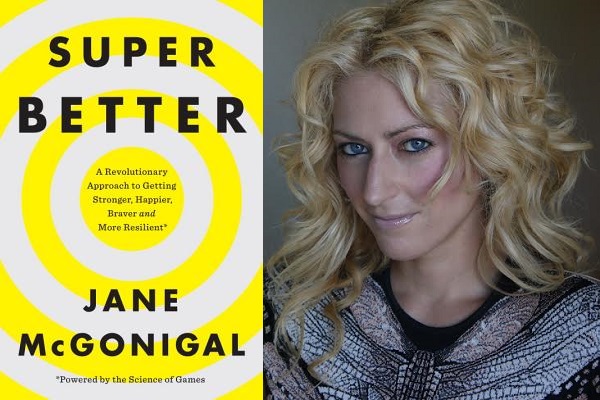 Can gaming make a better world? How can we use gaming every day to boost our resilience and support our personal growth?

Game designer and author Jane McGonigal wondered this as she struggled to recover from a severe concussion that left her bedridden with crippling depression and suicidal thoughts. Already a renowned game creator, she decided to turn her recovery process into a game. Her method would become the scientifically-backed web-based game SuperBetter, which has helped over half a million people recover from setbacks like emotional trauma, physical injury, chronic pain, anxiety, and depression. What started as McGonigal’s own simple, motivational exercises quickly grew into a digital game, then an online portal and a major research study with the National Institutes of Health.

In her new book, SuperBetter, McGonigal recounts her journey toward developing the SuperBetter game, including the decade’s worth of scientific research into the ways games change how we respond to stress, challenge, and pain. She explains how we can cultivate new powers of recovery and resilience in everyday life simply by bringing the same psychological strengths we naturally display when we play games—such as optimism, creativity, courage, and determination—to real-world situations. Already praised by the likes of Charles Duhigg, Gretchen Rubin, Daniel J. Siegel, and Felicia Day, SuperBetter is a guide to the science behind McGonigal’s life-changing game design and includes “gameful” challenges and exercises following the SuperBetter method—so readers can start playing!

Jane McGonigal is the director of game research and development at the Institute for the Future, and she is the founder of Gameful (gameful.org), which she describes as "a secret headquarters for worldchanging game developers." Her 2012 TED Global talk about how games boost resilience and help us experience post-traumatic growth has been viewed over 5.1 million times. Her vision is to see a game designer nominated for a Nobel Peace Prize by the year 2023. She has been named one of the “10 Most Powerful Women to Watch” (Forbes), “20 Most Inspiring Women in the World” (Oprah Winfrey for O Magazine), and “Top 10 Innovators to Watch” (Business Week), and had the #1 spot on the “Annual List of Top Ten Sexy Geeks” from Violet Blue. She has been featured in The Economist, Wired, The New York Times, and on MTV, CNN, and NPR. McGonigal holds a PhD from the University of California at Berkeley in performance studies, and has consulted and worked on projects for companies including Intel, Nike, Disney, Microsoft, Nintendo, the American Heart Association, the Oprah Winfrey Network, the New York Public Library, and Nike. She lives in San Francisco with her husband and children.

Join us for a very special talk and Q&A with Jane McGonigal at Bookshop Santa Cruz.

Many thanks to our event partners: Santa Cruz Tech Beat and Santa Cruz New Tech Meetup

Santa Cruz New Tech Meetup is a group for Santa Cruz professionals who want to learn about stimulating new technologies that can give companies a competitive edge, boost your career, and spark the flame of entrepreneurship in our community. Present, Learn, Network, Invent, and keep high tech businesses growing in Santa Cruz--at events every first Wednesday of the month.

SuperBetter: A Revolutionary Approach to Getting Stronger, Happier, Braver and More Resilient--Powered by the Science of Games (Hardcover)