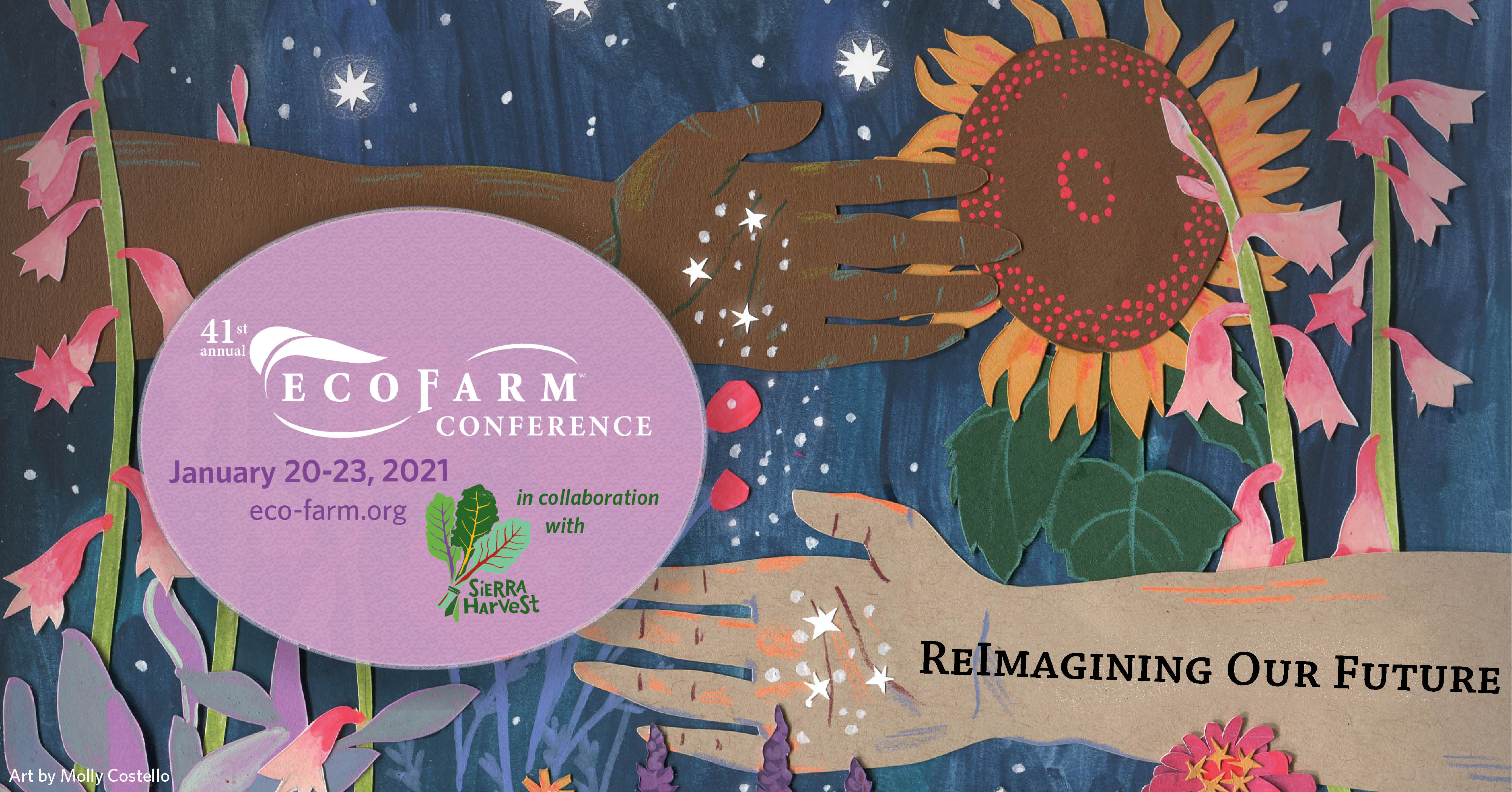 Building upon its farmer-to-farmer education model, EcoFarm is an essential networking and educational hub for ecologically-minded farmers, ranchers, and all who work to support their success in growing a healthy and just food system and world. Mark your calendars for January 20-23, 2021 and get ready for an EcoFarm Conference unlike any before as we will convene online for our 41st event! EcoFarm Conference will feature inspiring keynotes, educational workshops, skill-building pre-conferences, extensive networking, and a virtual trade show where you can connect with exhibitors. There will be meaningful opportunities for all – whether you join as an attendee, sponsor, exhibitor, speaker, or volunteer. Books by authors featured at the conference are available below, from Bookshop Santa Cruz.

AMY WU
Untold History: Asian Farmers in California
Wednesday, January 20th, at 1:30
Amy Wu is an award-winning writer for the women's ag and agtech movement. She is the Founder & Chief Content Director of From Farms to Incubators, a multimedia platform that uses documentary, video, photography, and the written word to tell the stories of women leaders and innovators in agtech. Wu also sits on EcoFarm's Diversity Advisory Group and has led panels at EcoFarm's annual conference, includiing "An Untold History: Asians in Farming." Prior to starting From Farms to Incubators, she spent over two decades as an investigative reporter. Wu earned her master's degree in journalism from Columbia University and speaks fluent Mandarin Chinese. She is the author of the forthcoming book, From Farms to Incubators: Women Innovators Revolutionizing How Our Food Is Grown, which can be preordered below.

MARION NESTLE, keynote session panelist
Reimagining Our Future
Wednesday, January 20th, 4:30–6:15
Marion Nestle is Paulette Goddard Professor of Nutrition, Food Studies, and Public Health, Emerita, at New York University, in the department she chaired from 1988-2003 and from which she retired in September 2017. She is the author of many award-winning books about food politics, public health, and nutrition. Her most recent book is Let's Ask Marion: What You Need to Know about the Politics of Food, Nutrition, and Health (2020). She blogs at www.foodpolitics.com and tweets at @marionnestle.

SARU JAYARAMAN, keynote session panelist
Reimagining Our Future
Wednesday, January 20th, 4:30–6:15
Saru Jayaraman is the President of One Fair Wage, Co-Founder of the Restaurant Opportunities Centers United, and Director of the Food Labor Research Center at the University of California, Berkeley. Jayaraman is a graduate of Yale Law School and the Harvard Kennedy School of Government. She is the author of the bestseller Behind the Kitchen Door and Forked: A New Standard for American Dining, and the co-editor of Bite Back: People Taking On Corporate Food and Winning. She attended the Golden Globes in January 2018 with Amy Poehler as part of the Times Up action to address sexual harassment. In 2019, she was named the San Francisco Chronicle Visionary of the Year.

REGINALDO HASLETT-MARROQUIN, keynote session panelist
Agriculture for a Regenerative Future: Decolonization and Indigenization of Regenerative Agriculture
Thursday, January 21st, 3:30–6:15
To be presented in English and Spanish
Reginaldo Haslett-Marroquin began working on economic development projects with indigenous Guatemalan communities in 1988. He served as a consultant for the United Nations Development Program’s Bureau for Latin America and as an advisor to the World Council of Indigenous Peoples. He was a founding member of the Fair-Trade Federation in 1994. Haslett-Marroquin is an owner-founder of Regeneration Farms LLC, and Founder and President of the Regenerative Agriculture Alliance. Regi was awarded a prestigious lifetime Ashoka Fellowship in 2018 for his work in Regenerative Poultry Systems, which is at the center of a multitude of national and international initiatives. This system is designed to be uniquely aligned with the social and economic, conditions of new, immigrant, and small farms and marginalized communities. The system is designed for large-scale and global impact. Regi is the author of In the Shadow of Green Man, My Journey from Poverty and Hunger to Food Security and Hope, available here.

BRYANT TERRY
An Evening with Bryant Terry: Live Fireside Chat & Cooking Demo
Friday, January 22nd, 5:30–7:00
Bryant Terry is a James Beard Award-winning chef, educator, and author renowned for his activism to create a healthy, just, and sustainable food system. Since 2015 he has been the Chef-in-Residence at the Museum of the African Diaspora (MoAD) in San Francisco where he creates public programming at the intersection of food, farming, health, activism, art, culture, and the African Diaspora. He is the author of numerous cookbooks including Afro-Vegan: Farm-Fresh African, Caribbean, and Southern Flavors Remixed and, most recently, Vegetable Kingdom: The Abundant World of Vegan Recipes. He lives in Oakland, California with his wife and two brilliant and beautiful children.

RUPA MARYA, keynote speaker
Farming Is Medicine: Transforming our World through Agroecology
Saturday, January 23rd, 9:45–11:00am PT
Drawing on data from the health sciences, history, ecology and soil science, physician, writer and farmer’s wife Dr. Rupa Marya will describe how agroecology can serve as the leading edge of transformational practices that can directly heal what ails us. Boldly articulating the need for a culture of care, she will show how colonialism fundamentally altered key ways of relating that held our health and the health of the planet in balance. Through the impact of decolonizing food and medicine, farmers and farmworkers play a crucial role as the ultimate stewards of our health. Marya is an Associate Professor of Medicine at the University of California, San Francisco in the Division of Hospital Medicine with a focus on Social Medicine. She is a co-founder of the Do No Harm Coalition, a group of healthcare workers committed to changing social structures that make health impossible for different groups of people. Currently Rupa is writing a book making a case for a global culture of care with writer, economist, and activist Raj Patel, entitled Inflamed: Deep Medicine and the Anatomy of Injustice.

Let's Ask Marion: What You Need to Know about the Politics of Food, Nutrition, and Health (California Studies in Food and Culture #74) (Hardcover)

Inflamed: Deep Medicine and the Anatomy of Injustice (Hardcover)

From Farms to Incubators: Women Innovators Revolutionizing How Our Food Is Grown (Paperback)

Behind the Kitchen Door (Paperback)