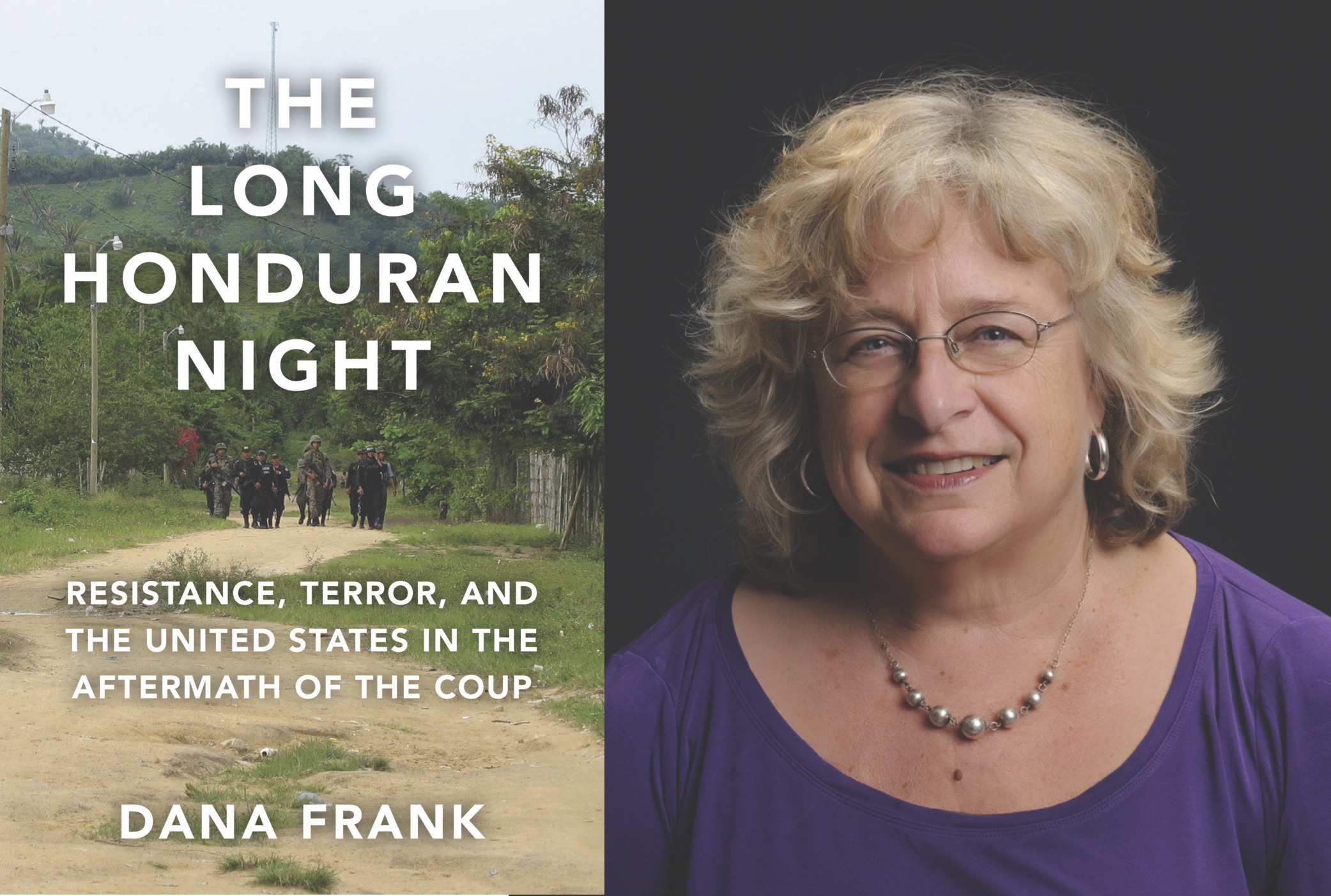 Professor Dana Frank will join us to discuss and sign copies of her new book, The Long Honduran Night—a story of resistance, repression, and U.S. policy in Honduras in the aftermath of a violent military coup. This event is cosponsored by The Humanities Institute UC Santa Cruz.

This powerful narrative recounts the dramatic years in Honduras following the June 2009 military coup that deposed President Manuel Zelaya, told in part through first-person experiences, layered into deeper political analysis. It weaves together two broad pictures: first, the repressive regime that was launched with the coup, and the ways in which U.S. policy has continued to support that regime; and second, the brave and evolving Honduran resistance movement, with aid from a new solidarity movement in the United States.

Although it is full of terrible things, this is not a horror story: the book directly counters mainstream media coverage that portrays Honduras as a pit of unrelenting awfulness, in which powerless people sob in the face of unexplained violence. Rather, it’s about sobering challenges with roots in political processes, and the inspiring collective strength with which people face them.

“Dana Frank has written a searing portrait of a nation in crisis, a book that is startling, enraging, and humane all at once. Her most important accomplishment is never losing sight of the hardships and treachery that ordinary Hondurans have had to endure these last several years, nor the dignity with which they have survived it all.” —Daniel Alarcon, Executive Producer of Radio Ambulante, author of At Night We Walk in Circles

Dana Frank is Professor of History Emerita at the University of California, Santa Cruz. She is the author of Bananeras: Women Transforming the Banana Unions of Latin America (2005; repr. Haymarket 2016); Buy American: The Untold Story of Economic Nationalism (Beacon, 1999); Purchasing Power: Consumer Organizing, Gender, and the Seattle Labor Movement, 1919-1929 (Cambridge, 1994); Local Girl Makes History: Exploring Northern California's Kitsch Monuments (City Lights, 2007); and, with Howard Zinn and Robin D. G. Kelley, Three Strikes: Miners, Musicians, Salesgirls and the Fighting Spirit of Labor's Last Century (Beacon, 2001). Her contribution to Three Strikes has been reprinted, with a new introduction, by Haymarket Books as Women Strikers Occupy Chain Store, Win Big (2012). Since the 2009 military coup her articles about human rights and U.S. policy in Honduras have appeared in The Nation, New York Times, Politico Magazine, Foreign Affairs.com, Foreign Policy.com, Miami Herald, Los Angeles Times, The Baffler, and many other publications, and she has testified before both the U.S. Congress and Canadian Parliament.

This free event will take place at Bookshop Santa Cruz. Chairs for open seating are usually set up about an hour before the event begins. If you have any ADA accommodation requests, please email info@bookshopsantacruz.com by March 5th.

Long Honduran Night: Resistance, Terror, and the United States in the Aftermath of the Coup (Paperback)