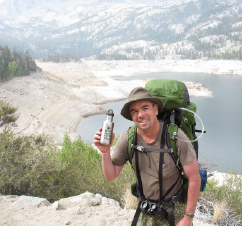 Rico has had a lot of different jobs over the years--carpenter, office manager, teacher, marketing copywriter--but he's spent most of his adult life selling books, first at Capitola Book Cafe and now at Bookshop Santa Cruz, where he manages the Fiction section. In his spare time he does a lot of birdwatching, backpacking, and woodworking. His short stories have appeared in dozens of magazines around the country--one was a Notable Story of the Year in the 2009 Best of the West anthology and two were nominated for the 2014 Pushcart Prize. His essay, "Of Human Carnage," was selected for Best American Essays 2016. Though he mostly reads literary fiction, he also loves outdoor adventure, history and anything about Africa. Aside from being around books all day, his favorite part of the job is making recommendations and turning people on to authors they haven't discovered yet.

If, like many people, you’ve spent the last two years mostly stuck inside, anxious about the next COVID variant, you need to read this book right now. Dick Conant was a charismatic but troubled adventurer, a throwback to an older time. Though his story is ultimately tragic, he barreled his way through life unafraid, making friends, dodging death, and completing insane feats of endurance. Reading about him will make you want to go outside and do something fun and maybe even a little crazy and let Mother Nature wash your anxieties away.  —Rico

The story of a mixed-race adolescent (Black father, white mother) growing up in desolate Apple Valley, California, in the early 1990s, this graphic memoir blends the nightmare of being one of the few people of color in a mostly white small town with the joys of friendship and self-discovery. Spooner’s memory for the specific social markers and hierarchies of high school is astonishing, and his evocations of the racism he experienced, some of it subtle, a lot of it overt and violent, are honest and heartbreaking. Having also grown up in a small desert town in SoCal (in my case, Indio) and being a fan of ’80s and ’90s punk rock, this was a bittersweet trip back in time that I won’t soon forget.  —Rico

Young Skins, Barrett’s first collection of stories, brutally and hilariously evoked life in the dead-end small towns of western Ireland where Barrett grew up. I’m very happy to report that his new collection is just as good and possibly better. Barrett astonishes with startling images and fresh turns of phrase, but his focus has broadened beyond drunk and shiftless young men to include a wider cast: a female police officer, a writer, a set of siblings who’ve lost both parents, and several other well-drawn characters with complex and compelling inner lives.  —Rico

Set against the drawn-out dissolution of the Apartheid system and sense of rebirth that followed, this endlessly readable novel tracks the Swart family and their own trajectory of dissolution and possible rebirth after the death of Rachel, the family matriarch. Though third-person omniscient narration hasn’t been in vogue since Henry James, Galgut, who was twice nominated for the Booker Prize before winning it with this book in 2021, utilizes an off-kilter variety that somehow manages to be simultaneously expansive, intimate, and vaguely menacing. —Rico

In this very entertaining anthology, 50 writers describe their relationship with the album that has most influenced their life. The great diversity among those included—Marlon James, Rachel Kushner, David Mitchell, Esi Edugyan, George Saunders, etc.—yields an equally diverse collection of albums. Rachmaninov, Miles Davis, the Beatles, Warren G, Kraftwerk, and Lizzo are all represented. As fun as it is to follow along as your favorite author geeks out on their favorite band or musician, the book offers surprising insights on the ways artists from one genre take inspiration from artists of another.—Rico

Long Players: Writers on the Albums that Shaped Them (Hardcover)

Other people have chronicled the good and the bad of the Golden State but few have done it with as much verve, off-beat humor, and thought-provoking analysis as José Vadi. In seven lively and lyrical essays, he views the place through the lives of people who, for one reason or another, missed out on the California Dream but are nonetheless uniquely Californian, including a laid-off tech worker, the grandson of migrant workers, and an obsessive skateboarder. Excavating often-ignored personal and community histories, the pieces deepen our understanding of the place we call home.—Rico

Franzen’s new novel opens on a precarious moment in the life of the Hildebrandt family. Two days before Christmas in 1971, the parents, Russ and Marion, have grown widely apart and are exploring other options. Meanwhile, their three older children are navigating personal and spiritual difficulties that may help define them as people and possibly ruin their lives. The novel represents a turn for Franzen, away from the eviscerating social critique of The Corrections and Freedom and toward a deeply compassionate realism. The novel’s depth of character, powerful exploration of morality, and astounding scope suggest it’s time to stop comparing him to his contemporaries and start comparing him to Proust and Tolstoy.—Rico

Munro is my favorite short-story writer of all time and this is probably my favorite of her collections. As with all of her collections, her writing is somehow both casual in feel but devastatingly precise, and her emotional register never fails. Three or four of the stories here are among the best written by anybody anywhere. - Rico

This debut novel got a lot of hype and I’m glad to say it deserved every bit of it. The narrator is a young Black woman who, among other bad decisions, takes up with a married man. That he’s wealthy, White and much older only adds to the trouble. Just when you think you know where the story is going, it goes somewhere very different—and much more interesting. Loved it! - Rico

This is one of my favorite books of 2020. A husband and wife decide to step out of the rat race and take their two small children on a long sailing voyage off the coast of Central America. Needless to say, things don’t go as planned. The writing is fantastic, the characters are all too human (read: flawed but sympathetic) and the story reads like the best kind of thriller. - Rico