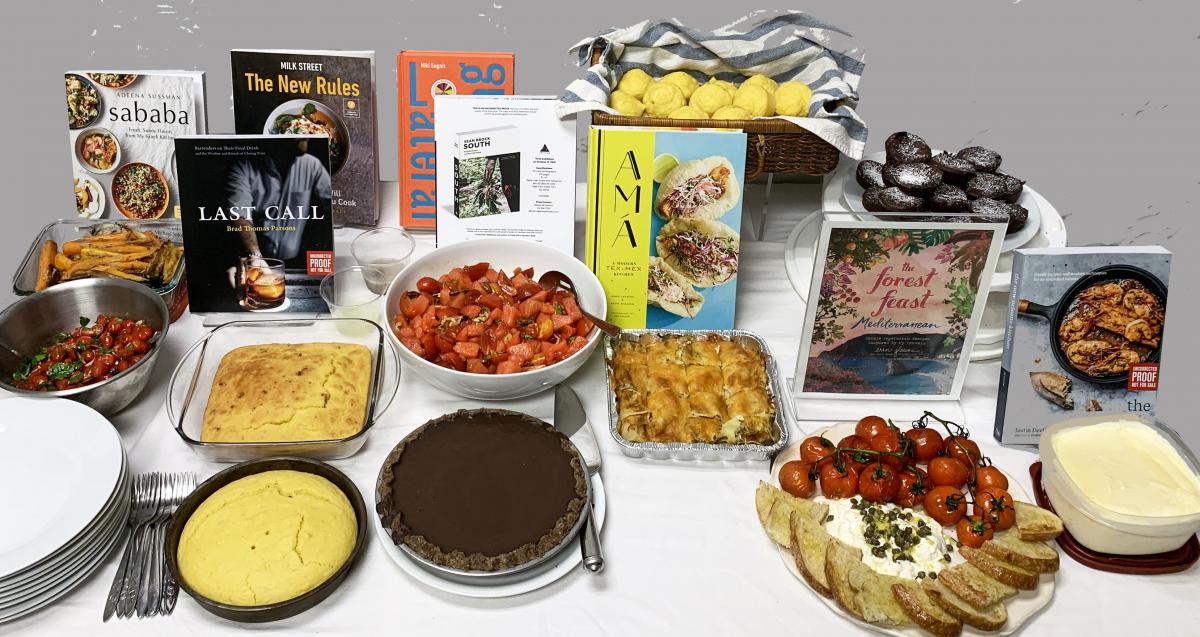 This article was printed in our 2019 Winter Newsletter.

Bookshop’s annual cookbook potluck has become one of our staff’s favorite traditions. In late summer (or as soon as we can get ahold of early copies), staff members take home some of the most anticipated cookbooks of the fall, try out recipes, then bring back a favorite dish to sample. We share the food and our experience cooking from the books, which is a great way for our staff to become familiar with new culinary titles and a delicious way to spend an afternoon. We hope our gathering introduces you to great books and inspires you to cook something together with friends.

My coworker Trey and I are both from New Orleans (which naturally means we love good food), so we had plenty of enthusiasm for trying out two new Southern cookbooks. I had the great pleasure of cooking from Sean Brock’s South, an outstanding book showcasing the rich, seasonal, and diverse cooking of that region. For our potluck, I took advantage of a slew of tomatoes from my garden and made the Heirloom Tomato & Watermelon Salad, which was dressed in a vinaigrette featuring Watermelon Molasses (which I had never made before and now cannot stop dreaming of). I also whipped up the Peanut Butter Chess Pie, which was topped with ganache, like a giant Reese’s Peanut Butter Cup. So delicious!

Trey took home The New Orleans Kitchen by restaurateur Justin Devillier and says it’s definitely authentic. The first three chapters, which cover the basics of all New Orleans cooking (like making a proper roux), are especially fantastic. Trey tried out numerous recipes and settled on Café au Lait Ice Cream for the potluck. Creamy and sweet, with notes of chicory coffee, it was an absolute treat.

Katherine, who does not consider herself a very ambitious cook, signed up to try out Sababa and was excited to discover that it was packed with recipes she wanted to try. She made the Tahini-Glazed Carrots for the potluck. They were outrageously good and so easy that she also had time to whip up creamy Fig & Yogurt Pops for the staff. Filled with bright and accessible recipes, this buzzed-about book deserves the hype.

Jenny loved the familial stories as much as the delicious recipes in the new book Amá. Chef Josef Centeno, whose family has roots in Mexico and Texas, blends the cuisines of those regions to create terrific Tex-Mex food. Loads of favorite recipes, including Breakfast Burritos and Tres Leches Cake, caught Jenny’s eye, but Mom’s Green Enchiladas made the cut—and made everyone at the potluck happy.

Jessica did Erin Gleeson proud by making a gorgeous version of her Burst Tomatoes & Torn Mozzarella dish that looked straight out of the pages of The Forest Feast Mediterranean. Artfully presented simple and seasonal vegetarian food is Gleeson’s signature, which makes her books perfect for dinner-party inspiration and coffee tables alike.

Emma enjoyed cooking from Milk Street: The New Rules and says it’s great for beginners since the recipes are very easy and there are a lot of tips and techniques to make you a better cook. She brought a fresh and delicious Grape Tomato Salad with Parsley and Dill to the potluck, which was a great way to celebrate the bounty of the season.

Jocelyn read through Lateral Cooking, a book championed by Yotam Ottolenghi and a companion to Segnit’s acclaimed The Flavor Thesaurus. Best for those who have cooking experience and an interest in culinary science, Lateral Cooking shows how one thing leads to another in the kitchen and how basic recipes can be built upon to make new dishes. Using those tips, Jocelyn made three versions of cornbread—classic, cheddar, and bacon. Yum!

Ivy signed up to try out The New Way to Cake even before she realized that the author was Benjamina Ebuehi, one of her all-time favorite contestants from The Great British Bake Off. The book is filled with interesting flavor combinations and enticing recipes, and Ivy says it will be a hit with experienced bakers. The Bitter Chocolate & Rosemary Tortes she made for the potluck were a hit with our staff.

Last Call: Bartenders on Their Final Drink and the Wisdom and Rituals of Closing Time by Brad Thomas Parsons (TEN SPEED PRESS)

Jax is both a book lover and a cocktail enthusiast, so Last Call was the perfect fit. Narrative-heavy but filled with plenty of drink recipes, it showcases bartenders from around the country who answered the question, “What is the last thing you’d want to drink before you die?” Jax found the drink she would pick, the Last Word, among them, so she made a couple of batches for the potluck. She stuck to the recipe for some drinks but added a cherry to others—because who wouldn’t want a little sweetness on their eternal way out?

Stefanie Berntson has had the pleasure of being Bookshop’s cookbook buyer for more than 25 years.