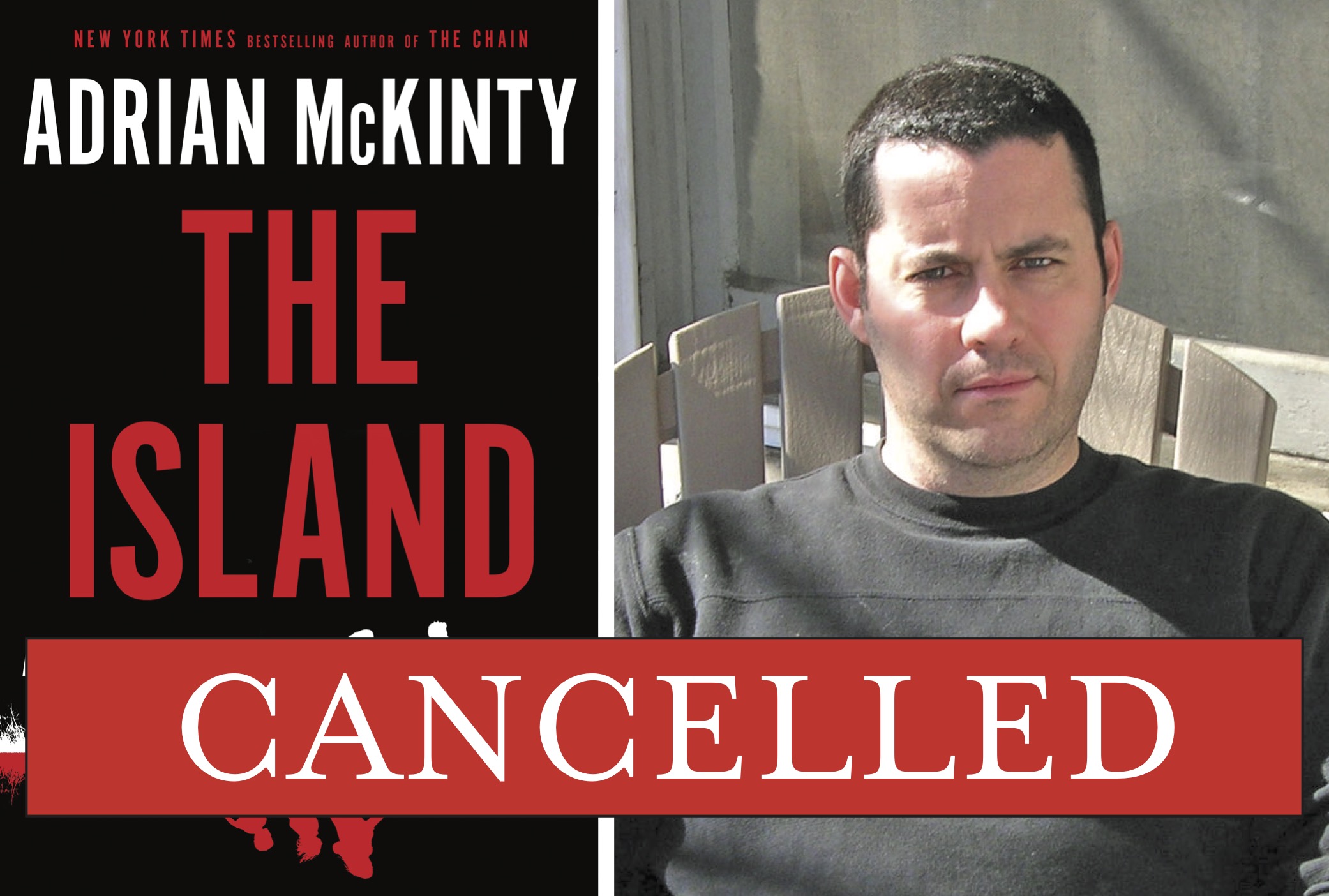 THIS EVENT HAS BEEN CANCELLED. WE HOPE TO RESCHEDULE THE EVENT AND WILL GIVE AN UPDATE ONCE WE KNOW MORE.

FREE, IN-PERSON EVENT: Bookshop Santa Cruz is delighted to welcome bestselling author and staff favorite Adrian McKinty to the store for a reading and signing of his new thriller, The Island, which has received starred reviews from Publishers Weekly and Booklist, who calls it “expertly choreographed and breathlessly exciting.”

“Heart-stoppingly tense and unpredictable, The Island twists a family vacation to a nightmarish breaking point. Adrian McKinty has written another irresistible and pulse-pounding thriller about the surprising places evil hides and just how far we’ll go for those we love.” —Karin Slaughter, New York Times bestselling author

IT WAS JUST SUPPOSED TO BE A FAMILY VACATION.

A TERRIBLE ACCIDENT CHANGED EVERYTHING.

YOU DON'T KNOW WHAT YOU'RE CAPABLE OF UNTIL THEY COME FOR YOUR FAMILY.

After moving from a small country town to Seattle, Heather Baxter marries Tom, a widowed doctor with a young son and teenage daughter. A working vacation overseas seems like the perfect way to bring the new family together, but once they're deep in the Australian outback, the jet-lagged and exhausted kids are so over their new mom.

When they discover remote Dutch Island, off-limits to outside visitors, the family talks their way onto the ferry, taking a chance on an adventure far from the reach of iPhones and Instagram.

But as soon as they set foot on the island, which is run by a tightly knit clan of locals, everything feels wrong. Then a shocking accident propels the Baxters from an unsettling situation into an absolute nightmare.

When Heather and the kids are separated from Tom, they are forced to escape alone, seconds ahead of their pursuers.

Now it's up to Heather to save herself and the kids, even though they don't trust her, the harsh bushland is filled with danger, and the locals want her dead.

Heather has been underestimated her entire life, but she knows that only she can bring her family home again and become the mother the children desperately need, even if it means doing the unthinkable to keep them all alive.

Adrian McKinty was born and grew up in Belfast, Northern Ireland. He studied philosophy at Oxford University before moving to Australia and to New York. He is the author of more than a dozen crime novels, including the Dagger and Edgar-award nominated debut Dead I Well May Be, the critically acclaimed Sean Duffy series, and the award-winning standalone thriller The Chain, which was a New York Times and #1 international bestseller. ​McKinty’s books have been translated into over 30 languages and he has won the Edgar Award, the International Thriller Writers Award, the Ned Kelly Award (3 times), the Anthony Award, the Barry Award, the Macavity Award, and the Theakston Old Peculier Crime Novel of the Year Award.