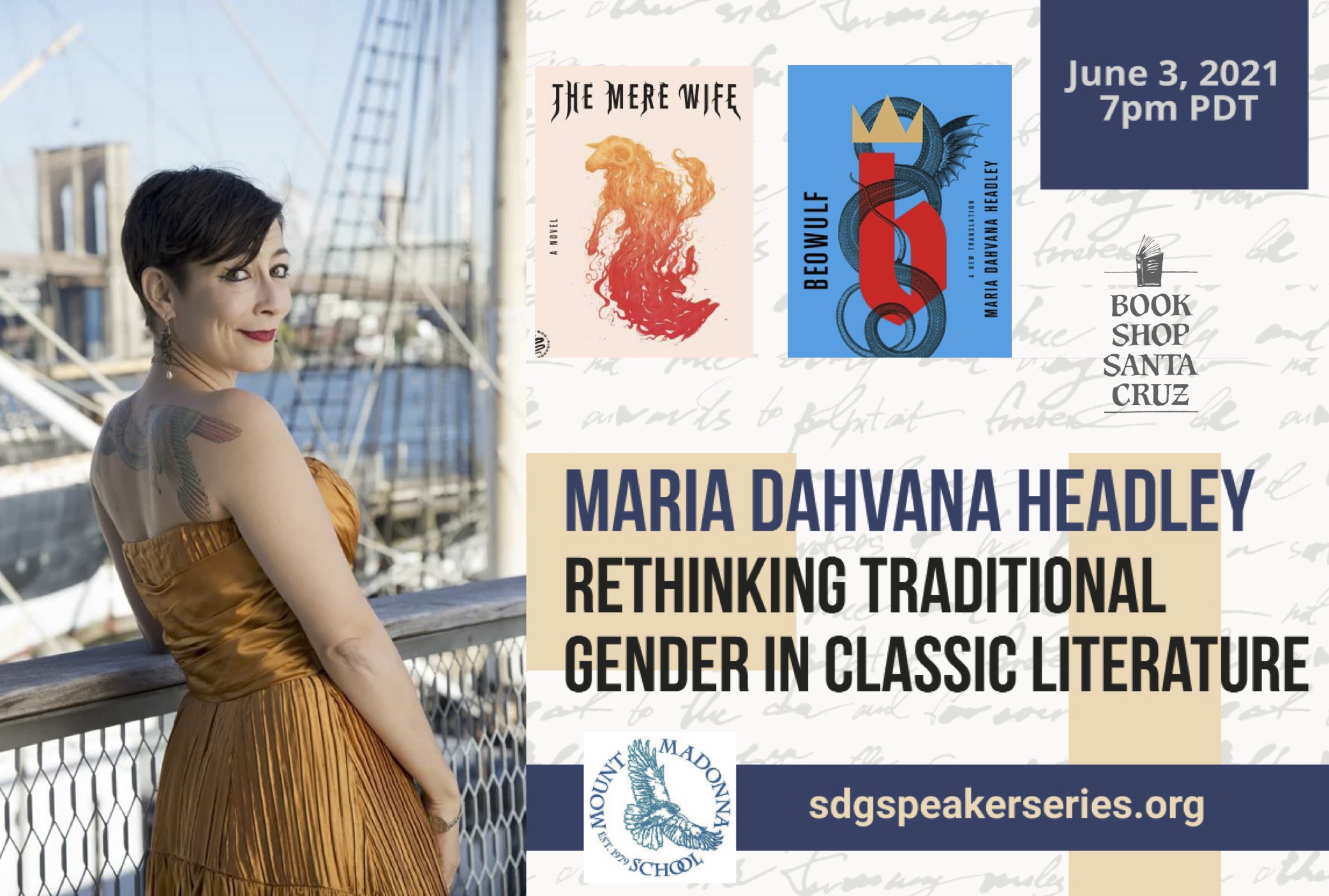 The Mount Madonna School (MMS) public speaker series based on the United Nations (UN) Sustainable Development Goals (SDGs) began in February and the season concludes June 3 with Maria Dahvana Headley’s Beowulf: A New Translation, a feminist reworking of one of the oldest surviving texts. Join Maria Dahvana Headley as she and the audience explore the boundaries of gender and tradition.

Maria Dahvana Headley’s Beowulf: A New Translation is a feminist reworking of one of the oldest surviving texts. Beowulf has always been a tale of entitlement and encroachment, powerful men seeking to become more powerful, and one woman seeking justice for her child, but this version brings new context to an old story.

The Mere Wife follows the basic narrative arc of the original Beowulf but at the same time revises the epic into a women-centered story set in modern suburbia.

Rethinking and rewriting perspectives that have come to be accepted as truth, her novels empower the female and question the patriarchal stereotypes.

Join Headley and the MMS high school Values class students as they explore the boundaries of gender and tradition.

Maria Dahvana Headley is the New York Times-bestselling author of eight books, most recently BEOWULF: A NEW TRANSLATION (MCD x FSG). THE MERE WIFE (MCD x FSG), a contemporary adaptation of Beowulf, was named by the Washington Post as one of its Notable Works of Fiction in 2018. She’s written for both teenagers (MAGONIA and AERIE, HarperCollins) and adults, in a variety of genres and forms. Headley’s short fiction has been shortlisted for the Nebula, Shirley Jackson, Tiptree, and World Fantasy Awards, and for the 2020 Joyce Carol Oates Prize, and has been anthologized in many year’s bests; a collection is under contract to FSG. Her essays on gender, chronic illness, politics, propaganda, and mythology have been published and covered in The New York Times, The Daily Beast, Harvard’s Nieman Storyboard, and elsewhere. Her work has been supported by The MacDowell Colony, Arte Studio Ginestrelle, and the Sundance Institute’s Theatre Lab, among other organizations. She's taught writing in the master's program at Sarah Lawrence, and delivered masterclasses and writing lectures at Dartmouth, Northwestern, Wesleyan Nebraska, and Newman University, among others. She grew up in the high desert of Idaho on a survivalist sled dog ranch, where she spent summers plucking the winter coat from her father’s wolf.

The Mere Wife: A Novel (Paperback)