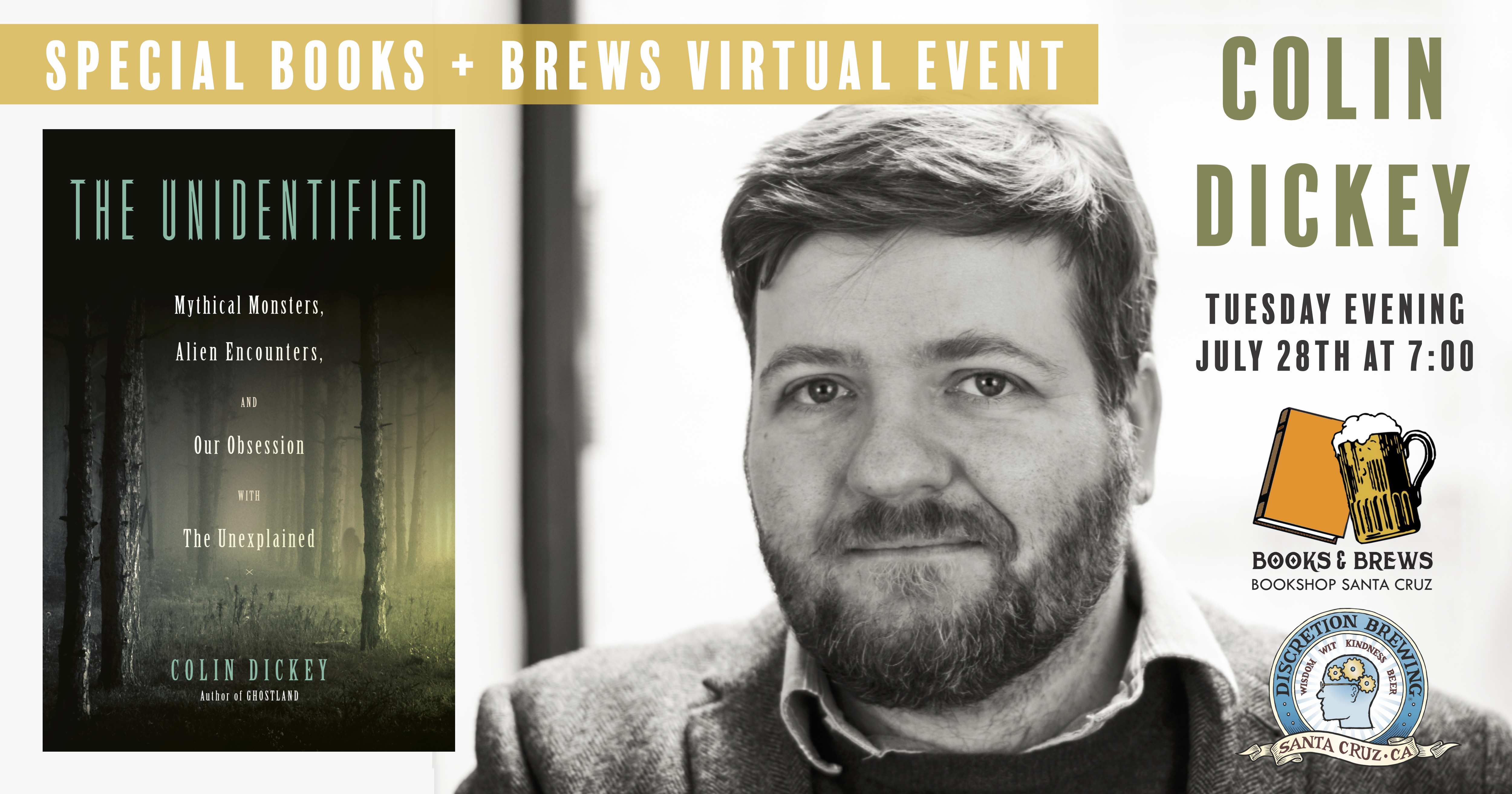 Our popular Books + Brews summer event series returns in a modified form this season. For the first of two events, we are teaming up with Discretion Brewing to host an online event with Colin Dickey, author of The Unidentified: Mythical Monsters, Alien Encounters, and Our Obsession with the Unexplained. Dickey will be in conversation with writer Lyz Lenz (God Land). Tune into our Crowdcast event from the comfort of home while you enjoy one of Discretion’s tasty beverages—they suggest their Book Club Pale Ale will pair beautifully with the book that Publishers Weekly calls, “A thought-provoking and deliciously unsettling guide into the stranger corners of American culture.”
Preorder a Book & Beer Bundle via Discretion Brewing here.
Register for this free Crowdcast event here.

In a world where rational, scientific explanations are more available than ever, belief in the unprovable and irrational—in fringe—is on the rise: from Atlantis to aliens, from Flat Earth to the Loch Ness monster, it seems the more our maps of the known world get filled in, the more we crave mysterious locations full of strange creatures. Enter Colin Dickey, Cultural Historian and Tour Guide of the Weird. With the same curiosity and insight that made Ghostland a hit with readers and critics, Colin looks at what all fringe beliefs have in common: the attempt to find meaning in a world stripped of wonder. Dickey visits the wacky sites of America’s wildest fringe beliefs—from the famed Mount Shasta where the ancient race (or extra-terrestrials, or possibly both, depending on who you ask) called Lemurians are said to roam, to the museum containing the last remaining “evidence” of the great Kentucky Meat Shower—investigating how these theories come about, why they take hold, and why as Americans we keep inventing and re-inventing them decade after decade. The Unidentified is Colin Dickey at his best: curious, wry, brilliant in his analysis, yet eminently readable.

Colin Dickey is a writer, speaker, and academic, and has made a career out of collecting unusual objects and hidden histories all over the country. He’s a regular contributor to the LA Review of Books and Lapham’s Quarterly, and is the co-editor of The Morbid Anatomy Anthology. He is also a member of the Order of the Good Death, a collective of artists, writers, and death industry professionals interested in improving the Western world’s relationship with mortality. With a PhD in comparative literature from the University of Southern California, he is an associate professor of creative writing at National University.

Lyz Lenz is the author of God Land and a columnist for the Cedar Rapids Gazette and contributing writer for the Columbia Journalism Review. Her work has also appeared in The New York Times, The Washington Post, Huffington Post, and Pacific Standard, among other publications. She lives in Iowa.

The Unidentified: Mythical Monsters, Alien Encounters, and Our Obsession with the Unexplained (Hardcover)